So, further to my post the other day, where I revealed how very much I suck at creating non-standalone stories, I spent much of Tuesday making an extremely detailed, colour-coded and highlighted 'Plot Shape' for FrostFire. Because I now know that I HAVE to fit all the story's events into one book (which I would very much like to complete in less than 100,000 words), it became imperative to compress the story where I could and cut anything that didn't seem completely necessary.

My Plot Shape sounds extremely pretty, and you would like to see what it looks like? Well, your wish is my command: 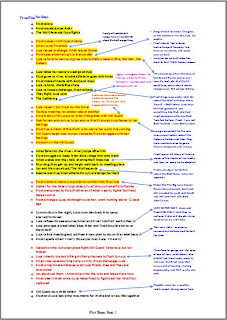 You may notice that it's not at all like the diamond-shaped plot diagram I showed you before. That's because I use those diamond diagrams to ensure there's an even distribution of events in my story, to make sure the action and emotional content peak at regular intervals, to keep track of story time, seasons and character ages.

A Plot Shape is the way I work out, at the basic level, what should be happening, in what order, and what events can be cut or combined. I made this using MS OneNote, which I find exceedingly useful, since it lets me put arrows in and move notes about when I change my mind.
Luckily I have my lovely editor's suggestions to go on in this endeavor. She won't be sending me her detailed notes for another couple of weeks, but she did pinpoint a few areas that immediately made me go 'Uh-oh - busted'. Those are the areas I've tried to think about with my new Plot Shape.

One of the things my editor noticed was some hand-waving. 'Er...Hand-waving?' You ask. 'What is that?' Let me 'splain. This is where something - a character's actions, their level of knowledge, or their choices - don't quite make sense in terms of what has gone before. But you, as the writer, need them to do, think or decide a certain something for the sake of your plot. So you 'hand-wave' over the awkward place, trying to distract the reader with some lovely description, or an explosion, or by pretending that the thing that's just happened isn't important. A good editor will catch you at it nearly everytime, but it never stops you from trying!

Another thing my editor put her finger on was an unnecessary journey my character was supposed to take in the middle of the story. Thinking about this as I was walking my dog this morning, I realised that all my main characters seem to go on a journey somewhere in the story, during which time they have a transformation mentally or emotionally. For Alexa in The Swan Kingdom, she goes off into the forest and learns to become confident and self-reliant. For Zira in Daughter of the Flames, she takes her people to Mesgao and struggles with her new identity and the challenges of leadership. Suzume also has a journey in Shadows on the Moon, during which she reaches her lowest ebb emotionally. All those journeys were vital.

But it seems to have become a bit of a habit for me, because there was really no need for Frost, the main character of FrostFire, to go anywhere - and yet I sent her off anyway. I didn't see it until my editor pointed it out. What's more, writing in this journey was going to take a lot of words, so cutting it ought to be really helpful in keeping the book to a reasonable length.

Finally, my editor put her foot down about the fanservice in this story. I really wanted to include Sorin and Zira from Daughter of the Flames as secondary characters in FrostFire. So I kind of shoe-horned them in; that was part of the reason for the unnecessary journey. I think I knew deep down that it all felt a little self-conscious - in fact, one of my very first blog posts was about how I had actually forgotten about Sorin and forgotten to include his scene, leading to me having to delete a day's work. That should have been a sign to me that Zira and Sorin needed to go. Much as I'm sure fans of Daughter of the Flames would have loved to see them again, it's not worth messing the book up to do it. I'm hoping readers will enjoy this story and these characters enough not to hold it against me. And the minute I cut those scenes from my Story Shape I found myself looking at a much leaner and more intense story, where there was room for more development of the characters who really matter - the ones whose stories have yet to be told.

Unfortunately, having worked myself up to plunge right into this work, I spent the whole of today locked in mortal combat with my new printer, which refuses to be part of my wireless network no matter how nicely I talk to it, how carefully I follow the instructions, or how hard I bang my head against the wall. *Le Sigh*

But tomorrow. TOMORROW. Yes, tomorrow, I shall begin...
Posted by Zoë Marriott at 07:41

Email ThisBlogThis!Share to TwitterShare to FacebookShare to Pinterest
Labels: Daughter of the Flames, FrostFire, Shadows on the Moon, Technical Difficulties, The Swan Kingdom, Whoops, Writing

OMG, that is awesome. I can't imagine doing all that before I start to write. I tend to draft a rough outline and then plunge straight in. Trouble is if I work it out too much I lose impetus for the writing. Respect, my dear.

Yes - wicked, naughty printer. I think it might be possessed...But I'm not going to let it get to me. I've got characters to maim.

Ha ha, Marian - I'm in awe of people who can write *without* all the plotting props I seem to need. Plot strands and character motivation all make tangles in my head and I have to comb them straight before I can do anything.