HOW DO YOU PICK YOUR TITLES?

Road Trip Wednesday is a "Blog Carnival," where YA Highway's contributors post a weekly writing - or reading - related question and answer it on our own blogs. You can hop from destination to destination and get everybody's unique take on the topic.
This Week's Topic:
How do you pick your titles?
Yes, I know it's not Wednesday. But I'd already written a post on Wednesday before the YA Highway topic came out and I realised that it was such an interesting one. So, never to be left out, I decided to do Roadtrip Wednesday on a Friday instead.
Shut up.
Okay, then: how did I pick my titles?
Well, I've got to admit that titles aren't really my forte. I struggle with them. A lot. And hardly any of my books make it through even the first draft without being re-titled several times. I find it infuriating and distracting to use a title that doesn't feel *right*, and I worry away at the problem like a coyote worries at a paw caught in a trap. 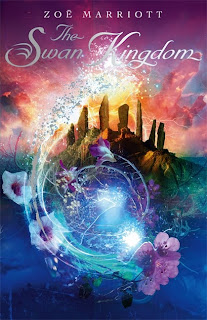 was originally titled Wild Swans after the fairytale that inspired it. But although I liked this title and felt it fitted, there was already a very famous book with that same title. Once the book was accepted for publication my editor and I came up with many title possibilities.
For a little while the book was called A Shadow of Swans, but marketing vetoed that. For a while I favoured The Cunning Woman, but my then agent hated it. My American editor suggested Red Fox, White Swan. Eventually my editor sent me a postcard just saying 'The Swan's Kingdom?' And I sent a note back saying 'The Swan Kingdom?' and that was it. I have to admit that I'm still not entirely comfortable with it, but I've never get come up with anything better so... *Shrugs*
Daughter of the flames

was originally called Signs of Fire. And it had that title for a long time in my head before I actually started writing. However, as soon as I got stuck into the story it started to feel vaguely wrong. I'm not sure why. I still think it's an okay title. It just didn't fit. 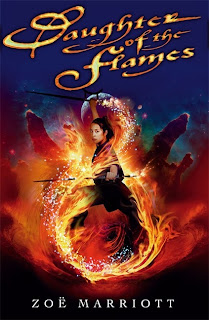 So I held a brainstorming session with my writing group. At the end of which, I felt utterly bewildered because NO ONE had come up with a suggestion that fitted. I had dozens of scribbled suggestions in my notebook and was trying to make sense of them when, suddenly, the words 'Daughter', 'Of' and 'Flames' leapt out at me. I added a 'the' to improve the rhythm, and, since my publisher loved it, we were set.
Shadows on the Moon

was a tricky book to title. I knew that I wanted the word 'moon' or 'shadow' in the title because both were important metaphors and images in the story. Until about halfway through the first draft the manuscript was called Fair as the Moon (which is a Biblical quote) but although I liked the title, it didn't really feel right to use a Biblical quote for a story set in a faerytale Feudal Japan. And it felt a little too...pretty. A little too NICE. I wanted something that hinted at the darkness in the story.
Friends suggested The Shadow Weaver, but Google told me this was a character from a cartoon. Shadow Spinner was already a book title. For a little while the book was called The Moon Mask, but again, it didn't feel ominous enough. Frankly, I was stumped. 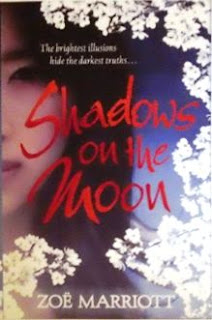 But luckily my subconscious was hard at work. Having decided to make my heroine's father a poet in the story, and the heroine herself a musician, I decided that I would write all my own poetry and songs for the book. One night I was scribbling away, trying to come up with a haiku that would encompass some of the story's themes about love and transformation, when this appeared on the page:
Love comes like stormclouds
Fleeing from the wind, and casts
Shadows on the moon
Instantly I knew I had found my title. And of all my book titles, Shadows on the Moon is probably the one I love most, because it's a phrase that is an integral part of the story and which sums up the book's most important themes perfectly. I also think that it subtly hints at the setting of the story.
So what about you guys? What titles have you used, and how did you come up with them?
Posted by Zoë Marriott at 07:55

Email ThisBlogThis!Share to TwitterShare to FacebookShare to Pinterest
Labels: Daughter of the Flames, Shadows on the Moon, The Swan Kingdom, Writing, YA Highway

I LOVE THAT HAIKU.

Erm. I've been a forever writer but none of my books have ever had titles. If I called them anything they always ended up being: The Dark Heart or something equally emo.

It was only when I started writing my MG novel aimed at the boy market that I came up with what I thought was the Best Title in the World Ever: Curse of the Djinn. I knew then that I would actually complete this novel.

I've come to realise that, as I wrote my second novel and came up with a name for it, that it sort of clinches it, makes it real to me. Once I name it, I can't not finish it.

I'm glad you called TSK The Swan Kingdom. I think it's the perfect title :D.

You've had a lot of luck with your titles, Zoe! I usually don't choose books with those really lame-ish titles (ex. The Adventures Of Huckleberry Finn) cos I find them too... straightforward and boring.

I still need to choose a title for my story. I'm still planning it - I haven't started writing - but I need a title so I can send my WIP to someone and also so I can discuss my story with Isabel/everyone without calling it 'my story'.

LOL! Thanks, Liz. I actually write a lot of haiku now - I've really come to love them. Writing haiku was how I came up with FrostFire as a title, too. I think titles are really important as a way of clarifying what's important about a story, so it makes sense to me that you feel more committed to finishing a work in progress one you've found a title.

Megha: A lot (a lot a lot) of writers just refer to their books as 'the WIP' even once they've picked a title, either because the don't want to give anything away, or because they know their publisher might change the name. So if you can't think of anything before you start writing, that doesn't mean you can't send the book out.

I LOVE Haiku and the one you wrote is extremely pretty, I think I'm going to have to quote you when I read and review Shadows on the Moon ;)

With regards to titles, I think I'm a sick puppy as I LOVE coming up with ideas for titles. I like to think I'm quite good at it so if you ever need any help, just ask ;)

Megha: When I sent part of my WIP to Alex for the first time, it didn't have a title, and it still doesn't. So don't worry about it. You shouldn't even be thinking about it too much at this point. You don't even know exactly how the story will play out. My original plan for the story I'm working on now has nothing to do with my WIP.

Zoe: I also stink at coming up with titles. Shadows on the Moon, FrostFire The Swan Kingdom, and Daughter of the Flames are all great titles, though. You should be proud of them.
I read The Shadow Spinner! It was a very good book. Based off of the Arabian Nights, I believe...

I swear I commented! Argh... it's disappeared.

Basically, I said I know. I know, I don't need a title.

Anyway, Zoe, I had a question. Do you ever feel that your plot is too... big? Too much? And at the end of your first draft, it doesn't seem like the story's satisfying enough?

Lynsey: Go ahead and quote me! I can't wait to READ your review. And having a talent for titles is a very good thing, so count yourself lucky.

Megha: Yes, all the time! Let me think about the question and maybe I'll do a post on it next week, okay?

Thanks Zoe! Could you possibly post about world building anytime soon? I'm working on my novel, and it'd be amazing to have something to refer to on that...

I'll think on it, Megha, but it's such a huge topic that every time I start I get overwhelmed and have to go away and have a chocolate bar instead!

Oh my gosh. I have another problem, and I really don't wanna overload you. I don't mind if you just reply in the comments.

Thing is, I'm scared of starting my novel. It has been planned and plotted properly, and now I'm too scared to start. It's not writers' block, I know. And I know that all the writers go through this. My planning's done. There's nothing LEFT to plan about. I need to start, but I can't.

I guess I'm afraid of what's gonna end up on the page. Hmmm.

Well...I COULD answer in the comments, but it's an interesting question. Maybe I'll combine this with the Too Big question and do a post on common fears and worries people feel before they start writing, next week. Okay?