Hello, Dear Readers! Happy Monday. I know it's not my normal posting day, but then again I don't really seem to have normal posting days anymore, do I? It's always hard to come back to the blog after a break, and this time it's particularly difficult because so much has happened. I don't think I'm really up to sticking to any kind of a schedule at the moment; it's too much pressure. But I do want to start being a bit more present online again. I miss it. I miss you. So here I am, with a report that might be a surprise to many of you: I went to World Fantasy Con at Brighton last week.

I actually bought my membership to WFC pretty much immediately after it was announced that the 2013 Con would be held in Britain for only the third time (that was back in 2010, I think? A long time ago, anyway!). One of the first things my dad said to me after we found out he was dying was that I *had* to go to WFC, no matter what happened - he knew how long I'd been looking forward to it. I didn't really feel that I could promise him that at the time. If things had gone the way that the doctors thought, my dad would probably have been in a hospice this past weekend and I would catagorically NOT have been OK with swanning off to Brighton and leaving him.

After he passed away, my mother and my sister both told me they thought I ought to go to the Con if I could face it. It was what my dad had desperately wanted me to do, and it would probably be good for me. I umm-ed and aaah-ed about it for a couple of weeks, but Walker Books had already paid for my accomodation and travel fare, and my friends from my writing group were going, and eventually I just decided to suck it up and go. So last Thursday, the 31st of October, I left my house at 8:30 and travelled all the way across the country (over five hours, not including the taxi rides at either end) to get to the Brighton Metropole Hotel, where the convention was being held.

I don't have a proper Con report per se, but I am bringing back a lot of lovely memories. I met several Dear Readers, all of whom were absolutely lovely, and all of whom were shocked to see me there because even though I'd tweeted about going, of course I haven't been online nearly as much as normal lately and apparently the message didn't get through. Luckily I had postcards and fridge magnets that I could sign and hand out. Thank you all for treating me like a real writer-person even though there were lots of much more famous and successful authors walking past all the time. Every time I meet a Dear Reader in real life I feel as if I've made a friend.

Highlights - the two YA panels, on which Frances Hardinge, Garth Nix, Holly Black, Neil Gaiman, Susan Cooper, Will Hill, Sarah Rees Brennan, Chris Priestley and Chris Wooding made lots of wonderful points with humour and insight. All the Guest of Honour events that I attended were also outstanding, particularly Joe Hill's hilarious and fascinating discussion with his UK editor Gillian Redfearn, and Susan Cooper's Lifetime Achievement conversation with Neil Gaiman, which was wandering and wistful and lovely (and the only panel where I was brave enough to ask a question).

I went to some fantastic readings, including one by my Furtive Scribbling pal Tina Rath, who read one and a half of the short stories from her delicious anthology The Chimera in my Wardrobe and reminded me just how much I want to re-read it. Garth Nix made me jump up and down in my seat when he read an extract from his upcoming Old Kingdom novel Clariel (even though I didn't win an Abhorsen bell charm and will *never* get over it) and then signed my programme. The reading that gave me the most chills was predictably Holly Black's. She read the first two chapters of The Coldest Girl in Coldtown and left me thrilled and traumatised. When I told her this, she very, very kindly gave me the copy of Coldest Girl that she had read from, and signed it for me. I skipped about (literally) telling every single person I met about this for the next hour or so.

It was marvellous to meet up with Lucy Coats, and Liz de Jager, and Katherine Langrish, and Amanda Sun and Joanne Harris, and Barry Goldblatt, and Karen Mahoney, and equally marvellous to meet several book bloggers whose work I really admire. I owe my friends Barbara Gordan, Tina Rath, Rachel Carthy and Marion Pitman all the thanks in the world for looking after me, giving me space when I needed it, and offering comfort when I broke down (which happened randomly, usually in public, and once right at the beginning of a packed panel).

It was very sad to see the Con end, and say goodbye to Brighton and everyone there. Coming home was even harder, because for the first time in my life my father wasn't there waiting for me, and that's a gap which can never really be filled. But I'm so glad that I went. I don't have any pictures to show you because predictably, I forgot to pack my camera. But here is a sexy picture of the amazing books I picked up and brought home, both from the dealer's room (where books were sold) and from the registration area where ARCs and books by some of the attending authors were given away: 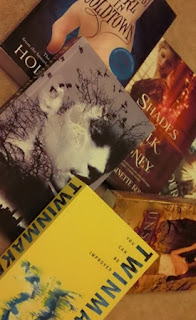 I actually had far more than this, but I couldn't find space for them all in my bags. So I put some back in the registration area for others to take, and a few others I scattered through the waiting areas at Brighton Railway station, Victoria Railway station, and Kings Cross. I hope others will find and enjoy them.

That's all from me for now, my chickies. Take care, and read you soon.

Email ThisBlogThis!Share to TwitterShare to FacebookShare to Pinterest
Labels: Inspiration

Sounds like you had an amazing time, I'm glad you felt up to going in the end :) I wish I still lived in Brighton so I could have gone!

Maya: It was amazing and exhausting. I'm not sure I'd do a full Con - four whole days, staying in the Con hotel - again, because it was a really overwhelming experience. But it was absolutely worth being there.

So glad you had fun! Lachy had the same problem and had to leave some of his books behind because he didn't have enough space!

Alex: Even after abandoning a load (sob) I strained a muscle in my shoulder hauling my suitcase onto and off of the Tube and various trains. Lesson learned. Next time I take less clothes.

I've posted some pics on FB, and tagged you in a couple. Shall I share them on your timeline or just email them to you?

B.: I found them and shared them to my timeline! Although I really hope no one brings that one of Garth Nix to his attention. Eeep.

Yes. It was wild.

The event sounds like so much fun! I so wish I could have been there to meet you! I hope you enjoy the books and that you're doing better. :)

I'm glad it was great - I did think about going at one point but tbh I don't think I'd have managed it with the amount of stuff I have on at the moment. Sounds like it was really awesome tho. :)