MEGA EXCLUSIVE THE NIGHT ITSELF GIVEAWAY

Hello and happy Thursday, my duckies!

Today I'm going to tell you about a plan cooked up between Lovely Lass and me to get The Night Itself's title out there and hopefully generate some excitement and buzz around its release on July the 4th of this year. What's great about this plan is that it's going to run for three months and give you, my loveliest and most delightful Dear Readers, the chance to get your hands on a veritable treasure trove of wonderful prizes... on THREE seperate occasions.

This is what you can win: 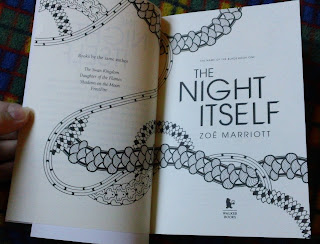 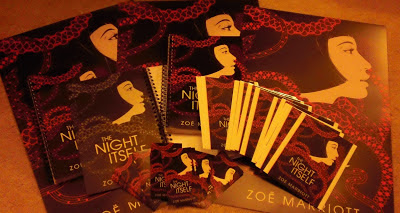 Each and every one of these is completely exclusive to this giveaway right now. There's no way to own any of these things other than to win them from us. The posters and notebooks? I had them specially made for this - there are four of each in existence. One will stay with me, and the others are for you.

The advanced reader's copies of this book are being so tightly controlled that I only own one myself. Lovely Lass has possession of the rest and will be sending yours out to you straight from Walker Books in London. That's how exclusive they are.

The Night Itself is a book that I'm thrilled - and scared! - to share with you. It's utterly different to anything I've ever written before, and it's pretty darn different from anything I've read or seen on the shelves too. It's my first urban fantasy story, but it also has elements of horror, and it's funny (I hope). It's a very modern story with a very modern heroine, but it draws on all my favourite elements of Japanese fairytale, myth and folklore. One of the very few people who've read this book - fellow writer Katy Moran - had this to say about the story:


...last night I finished THE NIGHT ITSELF. It's shattering. I loved it so much. Wish I had read at 15... It's amazing – it was like someone had slipped something hallucinogenic into my cocoa. So real. So scary.

Which was pretty much the effect I was going for. *Evil Laughter*

So! What do you have to do to be entered for a chance to win all this amazing stuff and read this book MONTHS and MONTHS before anyone else? Well, there are three identical prize packs, and we'll be doing a giveaway now in March, one in April and one in May. I'm going to set a task for you in each month - a task which will hopefully help to raise awareness of the book.

This month the task comes in two parts. First: I need you to Tweet, Facebook or blog about this giveaway to spread the word. Second: I need you to add the book on Goodreads.

Obviously once you've done both those things you should come back here and include a link to both the Tweet/Facebook entry/blog and your books page on Goodreads where you've added the book. We're going on the honour system so I won't be checking each and every entry, but I *will* be checking the winner's entry, which makes it completely pointless to try to cheat (although I'm sure you guys wouldn't anyway).

That one comment which includes both a link to Goodreads and to a Tweet/FB entry/blog will constitute one entry into the giveaway. If you don't have a Goodreads account, it's simple, easy and FREE to open one and I encourage you to do that. There's no age limit and it's a great, fun website that I personally use all the time (feel free to friend me! I promise to friend back). If you don't have a Twitter/FB account or a blog, you can ask a friend or family member to spread the word for you, as long as you provide a link.

Entries which attempt to spread the word by leaving comments about the giveaway on other people's blogs will NOT be included. Sorry, guys, but authors/bloggers do NOT like this - it makes them feel like they're being spammed. DON'T DO IT.

If you would like to increase your chances of winning? You can get extra entries by spreading the word in additional places. If your first entry was with a Tweet, you can get an additional entry by FBing, or blogging. Or both. Make sure that any additional entries are each left in the comments trail of this post IN A SEPARATE COMMENT. I'll be using a random number generator to pick the winner, so if your new entries are not in separate comments they won't be counted.

This first giveaway will close at midnight on Monday the 18th of March. I will pick the winner of the first prize back on Tuesday March the 19th and post the winner's name on my blog that day.

(P.S. This competition is to win a UK proof copy of The Night Itself. Other regions, like the U.S., will hopefully get their own editions later. As a result, only people with a European postal address will be eligible to win the giveaway.)

Email ThisBlogThis!Share to TwitterShare to FacebookShare to Pinterest
Labels: Giveaways, Good News, The Name of the Blade, The Night Itself

Definitely want to be in this (even though I've already pre-ordered my copy).

TOO EXCITED! Of course, I already had TNI on my to-read list!

Yay! This is wonderful. Will be buying a copy anyway but all those goodies!

Awesome, the design and notebook look so beautiful!! Thanks so much for the giveaway :D

And it was already on my to-read list, so here we go: http://www.goodreads.com/review/list/14772835-ina?format=html&shelf=to-read ^_^ Many thanks for the totally awesome giveaway! <3

Yay! Thanks so much for the giveaway :)

Thank you so much for the awesome giveaway!

Here are my links!

And a facebook entry https://www.facebook.com/cherie.rosemin
My privacy settings are normally friends only but I set it as viewable to the public so it should be viewable. If not, I promise it's there.

Thanks for the awesome giveaway!

Yay! Thank you for this Zoe!

I tweeted and had it added to GR already :-)

I'm dying to get my hands on this one Zoe!! The swag looks pretty awesome too :o)

Aw, I wish I wasn't American! I can't wait to read this though and looking forward to it. Good luck to the giveaway particpants! (:

I also blogged about it :)