THE NAME OF THE BLADE: AMERICAN EDITION

People have been asking me for a while about the cover for the U.S. edition of The Night Itself - which is coming out in November under the title THE NAME OF THE BLADE from Candlewick Press. Originally they were going to go with the illustrated UK cover, but obviously then the UK cover changed to a photographic one. So they went off again and designed an entirely new piece of artwork, which I was asked to keep firmly under my hat for the time being.

However, yesterday I recieved a lovely package from Candlewick, containing advanced reader's copies (or ARCs) of THE NAME OF THE BLADE with the US cover in place. So I decided it was probably OK to share the cover artwork now. This is based on the fact that the last time I had a book coming out in the US, I held off from sharing the cover for a very long time, waiting to get official permission, even after the image had turned up on the publisher website, NetGalley, and Amazon, and people started sending it me asking me what it was. I ended up feeling like a bit of a twit. This time I'd like to get in first.

So without further ado, I present to you: 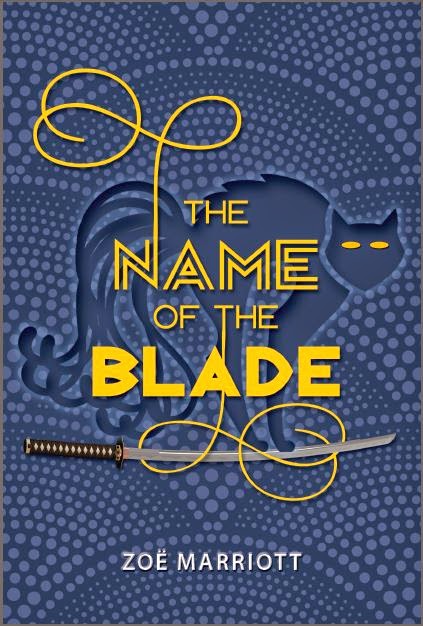 On the physical version, I'm told that the yellow and metallic bits you see - the lettering, and the sword - will be in silver and gold foil, with the rest of the cover in a matt finish. As far as I'm aware this will be a hardcover release.

It's very different from any other urban fantasy covers, isn't it? What do you guys think? Let me know in the comments!

I have a couple of ARCs of THE NAME OF THE BLADE going spare, so I'm thinking about maybe combining these with other bits and pieces I have to hand and doing a giveaway next week - more on that when I've worked it out.

Oh, and heads-up that I'm posting on the Author Allsorts about how I write this Friday, so tune in for that. I'll probably post a link here just as a reminder :)
Posted by Zoë Marriott at 01:51 10 comments: