Hello, Dear Readers! Happy Monday and happy September - I hope that the week and the month are shaping up to be pleasant for you all. Humanity damn well deserves some form of seasonal hot drink (maple rooibos tea in my case), a nice fluffy jumper, some crisp, golden leaves and a run of sunny, frosty days after the year we've had so far.

In an attempt to start autumn off right, I bring tidings of great joy for US Dear Readers - a Kindle Countdown deal on The Book of Snow & Silence over on Amazon.com. The book's currently 99 cents (sorry, my UK keyboard doesn't have a cent symbol) and will slowly increase in price over the next week, so it's in your interest to grab it as early as possible if you want it. Don't feel too left out, my UK lovelies - there's a similar deal on British Amazon coming up shortly.

"If it isn't too much trouble, then can you please do a blog post on your writing process? How you research, edit and take final decisions etc? And whether you pen the draft first or type it directly?"

I've talked about this a lot in various posts and interviews, but I'm not sure if I've ever collated all my answers in one place - and I always find glimpses into other authors' processes fascinating - so I decided to make this a new post.

A Disclaimer: This is not The One True Way to Write. There is no one true way. This my own method that I've developed over years of hit-and-miss, trial and error experimentation - it's what works for my particular creativity, with my particular routine, utilising my particular brain circuitry. Feel free to try any or all of the methods I talk about, but also to read with interest and then decide that every single thing I do is completely wrong for you. The only 'Right Way' to write is the way that makes you happy and productive. Ok? Ok.

First up, I am a long-hand drafter. 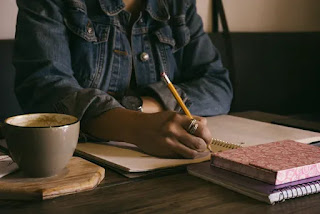 It's a habit that I developed from 2001, back when I was working as an extremely underpaid and overworked civil servant, scribbling in my notebook during breaks and on the longish bus journey to and from the office. Frankly, there were days when being able to dip into my imaginary world whenever I had a spare moment was the only reason I managed to keep my grip on reality in this one, and this being before smartphones or tablets (because I am ancient, kids), writing in longhand was my only option.

In 2010 I became a full-time carer for my father - who relied on me to administer his haemodialysis - and decided to try and speed up my writing process by hauling my laptop with me while I was looking after him, and drafting directly into a Word doc. This was a huge mistake: swiftly capturing all my darting thoughts in the form of scribbles and then transcribing those handwritten scribbles into the screen, editing and rethinking along the way, turned out to be a massive part of my drafting process. Without it, the 'first draft' that I produced was a complete mess, painful to read even for me, and torture to edit. I learned my lesson and have been a hardcore notebook collector ever since.

However, there's a downside to writing by hand for hours everyday, and that downside is Repetitive Strain Injury. In order to combat this, I usually write either with a fountain pen (nothing fancy - I lose them too often for that) or a brush pen, as they don't require a strong grip or much pressure to work. I also utilise the Pomodoro Technique, which basically requires that you work flat-out for short periods of time with no interruptions, then take a short break, then work again.

I try to do four thirty-minute writing springs in the morning (with a five minute break between to bathe my hands in warm water and gently stretch them, as well as to visit the bathroom, refresh my drink, or chuck a toy for my dog) before breaking to take the dog for his mid-day walk and have some lunch. Then, in the afternoon, I re-read and edit everything I typed up the day before, and finally type up my newest scribbles. This technique can yield between 600-6000 words in a day (my record was 9000 words in a day, but my writing hand swelled up and became intensely painful for weeks afterward, and, as above, I learned my lesson and don't push it anymore) and it effectively means that the completed 'first draft' of my novel is actually more like the third or fourth draft. 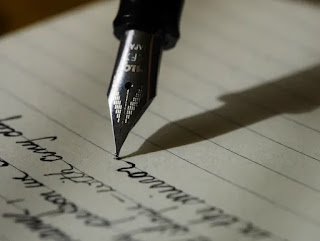 Most of my novels have been inspired in one way or another by elements of the real world - a setting/landscape, a culture, a piece of folklore or mythology or history. When I get an idea for a story that really grabs me (generally when several tiny idea fragments that have been floating around in my head for a while suddenly collide and become one Big Idea) I pick out one of my extensive collection of notebooks, something that feels like it would suit the main character to use, and label it with the date and my working title.

Then I start reading. First, I'll use the internet - yes, including Wiki - to figure out how much I don't know, which is usually A LOT. Then I'll start visiting all of the local libraries I can get to in order to borrow or order any and every book relating to my story that I can. These might be books, for instance, on the architecture and art of Edo era Japan, or on the landscape and wildlife of Northern India and Tibet, or every version of the Beauty & the Beast story throughout world history. Once I've munched my way through every book that I can get my hands on for free, I will start ordering the ones I a) feel I can't live without and b) can manage to afford on my budget. I'll also start ordering or streaming any documentaries, drama series, music, films, cooking shows, art history programmes... anything related to my research topic.

If I can afford it (which is sadly not always the case) this is also the stage where I will arrange a research trip or too, to scout out possible locations and take photos, or visit museums or exhibits.

My aim is to immerse myself so completely that I feel like I'm walking around in a cloud of information 24hrs a day. If possible, I want to be *dreaming* about this stuff. And through it all, I'll be writing ideas and information and key details down in the back of my notebook (starting with the last page and working forwards).

At a certain point, I'll feel this sort of internal 'click' and know that my research has reached critical mass and it's time to start writing. This doesn't mean I stop researching or that I know every detail that I'll need to know; it's more that I know enough to start, and I also know that if I don't start at this point, the fragile framework of the story might begin to collapse under the weight of all the facts and figures. Basically, writing is now the full-time job, not research. Once I start drafting/scribbling, I switch to writing in the *front* of the notebook (like a normal person) but I still make research notes or put down ideas for future scenes in the back. When drafting and research meet in the middle, it's time for a new notebook. On average I go through two to three notebooks, as well as a couple of 'refill' pads of paper per book.

For insight into how I make the choices that will turn my ideas about a story and characters into a coherent plot, you can listen to this podcast over on the RLF website (my section starts at about the 15min mark), or read this three-part blog series from my archive. This is actually the step that I struggle with the most, so it's the thing I've talked about the most extensively. 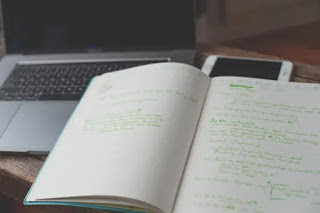 I start at the beginning of a story - what will be the prologue or first chapter for the reader - and work my way through until I get to The End. That's not to say that I'm never struck by blinding inspiration about a scene that's chapters away, or that I don't write those scenes down. It's just that, once I've written it, it'll stay in scribbled form in the back of my notebook until I've worked my way forward in the story to that point, at which point I'll type it up. So far, at least, I've never felt the need to write a whole book, or even most of it, out of sequence, and then put it all together afterwards. It can take me anywhere between six months and eighteen months (again, so far!) to complete a 'first draft'.

When it comes to editing, I start by going back to pen and paper. Here's an archive post that basically covers the process - but I'll note here that 'optional extra' I mentioned back then, of completely changing the format of the document before I print it out? Is now one of the most vital steps. It actually makes a massive difference to me, because by the time I've completed that draft I've often been staring at certain parts of it for months on end and I've stopped being able to distinguish between 'head story' (which is what I meant to say) and 'page story' (which is what the words arranged on the page actually convey to a reader). I know where every word, comma and piece of dialogue are *supposed to be* on the page, which means I don't notice what is *really there*, even if there are missing words or I've copied and pasted something random in. By rearranging all those words, commas and formating choices, I make it much easier to come back to the manuscript with a genuinely fresh eye. 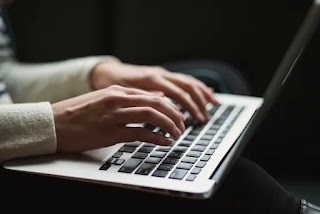 I like to change the portrait format of the document to landscape and then set the text into two columns so that it resembles the page layout that I'll often get from a copy-editor/proofreader.

Then I amend my line spacing (from double to single) and reset the font (from Times New Roman into something that's sans serif, like Calibri) and the text size (from 12 pt down to 11 pt, uusually).

Coincidentally, these changes can also potentially save me a chunk of paper in the printing, bringing a 300 page ms down to around 150 (yes, it's that dramatic).

So that's my (current) writing process. And that's also where I'll leave today's post. I hope that it was useful or at least interesting, AS - and anyone else who is reading. Do you have a writing process, or are you still experimenting? Do you have any tips or tricks to share? If so, sound off in the comments, and in the meantime, have a great week, muffins!