Not a post as such today, my cutie-patooties - just a quick note to let you know that my old friend the prolapsed disc has decided to return for an unexpected visit. Thus the lack of post last week and this week too, and the general eerie silence on all my social media. I hope that I will soon be on the mend, but right now I'm still spending most of my time lying immobile on my back with a hot water bottle plastered to my spine and far too many muscle relaxants in my system, all of which makes it miserable to try and write anything.

I'm hoping by next week sitting upright won't be torture anymore, but if you don't get a new post then, just take it as read that I'm still fine and am just babying my back for a little longer. When I DO return, I have a mega-giveaway that I want everyone to enter and help spread the word about, so get excited about that :)

Read you later, lovelies.
Posted by Zoë Marriott at 00:09 No comments:

Hello, my magical muffins! Happy Wednesday to all.

First of all, a massive thanks to everyone who came to the Lincoln Inspired event last Saturday. It was great fun and all the writers and organisers and readers I met were wonderful. Here's us during the panel: 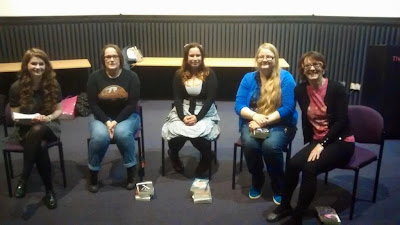 Taken by Bowen, the charming son of Kerry Drewery, who's on my right there (in a Roald Dahl t-shirt, no less). I actually felt terrible that day, with a sinus headache that would not quit - I ended up spending most of Sunday with my face in a bowl of hot steam - but I still have lovely memories of absolutely snorking with laughter at what everyone had to say. A+++ event, very good, would participate again.

This week I'm buried up to my eyebrows in my pre-submission edits on BaBBook. I was supposed to turn the book in to Wonder Editor and Super Agent by the end of April but the tonsillitis and complications thereof absolutely knocked the stuffing out of me, and although I did work through it as much as I could - I knew I was going to be late, but I didn't want to be horribly late - I reluctantly came to the conclusion last week that pretty much all the changes I'd made were utter &@)*, and that I'd missed loads of quite important stuff that I should have caught and improved or fiddled with in various ways. I wouldn't have been happy letting anyone see the 'edited' version.

So on Monday I went back to my original first draft (ALWAYS ALWAYS CREATE A NEW DOCUMENT FOR EACH NEW ROUND OF EDITS MY CHILDREN TRUST ME ON THIS) and started again. I'm already feeling much more positive about this version. Fingers crossed I can send it off soon. 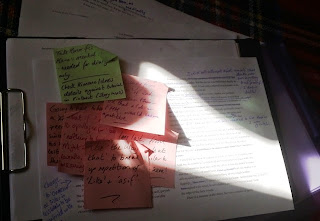 Once that's done I'll actually be out of contract - that is, without any outstanding books contracted to be written and published - for the first time since 2005. Which is a liiiittle scary, not gonna lie. But I have two projects that I'm desperate to work on next and a third that I'm also very excited for (although that one is slightly less developed).

One of these is another fairytale retelling, loosely linked to Shadows on the Moon, which will star a trans* main character - though it's not Akira, sorry! The second is a timeslip story which takes place in both the 1920's and contemporary Britain. The third one is a high fantasy inspired by ancient Babylon which will feature griffins. I'm hoping that Walker will take a liking to one or all of these and offer me a new contract, but I've got considerable work to do on research and synopses, and Wonder Editor will be busy with BaBBook once I've sent it to her, so it'll more than likely be a while before I can talk in more detail about any of them.

In the meantime, here's a snippet from BaBBook. Let me know what you think in the comments!

Everything came back in a starburst of agony. Fire flowed through my flesh, eating away at it in long glowing runnels, like rivers of molten metal burning my shoulder, my hip, and deep, deep into my side. I tried to cry out. All that emerged was a high, thin wheeze, whistling between my teeth. The effort made the hurt surge up over the rest of my body like a red tide, and if I had possessed the breath in that moment to do it, I would have begged the Moon for death.

I heard the voice only distantly, my own pained, panicked breaths drowning everything out. A large, shadowy shape moved across the orange screen of my closed eyelids – I couldn’t seem to open them – before a strong hand cupped the back of my head and tilted my neck up. Something touched my lip. The rim of a cup, rough and unglazed.

“I know,” the voice rumbled softly, soothing. “I know it hurts. Drink this. It will help.”

The cup tipped. I tried to swallow, but the bitter liquid within made me choke and cough. The pain flared and I let out a weak, stuttering sob.

“I’m sorry.” The fingers on my neck rubbed a little at the tight muscles there, like an apology. “Too fast. Let’s try again.”

There was a quiet noise, and then the voice sighed. “I – yes. Yes, child, it’s your father. You’re doing well. Drink up for me?”

Comforted despite my suffering, I did. The liquid was lukewarm, and it tasted awful. I choked again – just a little – but kept trying, and finally the cup was taken away.

“Ssh. No questions now. Rest. Sleep and get better.”

He laid me carefully back down, my head nestling into some soft, spongy pillow – but the movement jarred my shoulder, which made me flinch, which made my side and hip scream. I bit my lip, but couldn’t hold in another sob.

“Breathe out,” the voice – father’s voice? – rumbled. The slightly rough surface of a damp, cool passed over my forehead and my cheeks, wiping away sweat and tears. “Breathe in. Slowly now. Breathe out. It will pass. Pain always passes. Breathe in. What we know will pass, we can endure.”

I followed the rhythm he set, breathing slowly and quietly until both the clawing fire in my side and the panic had eased enough to be bearable. I sensed more than heard him shift away and stiffened.

My mind slowly clouded over as the stuff he had made me drink took effect. I fell asleep to the gentle, rumbling growl of the sweet lullaby that no one had sung to me since I was eight years old...
Posted by Zoë Marriott at 01:45 6 comments:

Email ThisBlogThis!Share to TwitterShare to FacebookShare to Pinterest
Labels: BaBBook, Photographs, Shadows on the Moon, Teasers

Just popping in this week with a flying reminder that I'm going to be at the Lincoln Inspired Event in (you guessed it) Lincoln on Saturday the 9th of May, doing an event with other local authors Kerry Drewery, Georgia Twynham and Cassandra Parkin. We're going to talk about reading and writing young adult fiction, take questions from the audience and sign books too.

I've met Kerry before and can vouch that she's a fascinating and thoughtful speaker, and I'm sure that Georgia and Cassandra will have loads of interesting stuff to say too (luckily I'll be there to crack jokes and be awkward, in case the mood needs lightening). I think it's going to be lots of fun.

More details about the location - the art museum The Collection - and where/how to get tickets to the event can be found in this leaflet and on the Lincoln Inspired website. Please do come along if you're in the area. Lincoln is one of my favourite places in the world and there is loads of other stuff to do - not only at the Festival, but in general - if you want to make a day of it. Dear Readers are, as always, kindly commanded to MAKE THEMSELVES KNOWN, and also to tell me if they have an objection to being tackle hugged because otherwise that's a thing that will happen.

Have a lovely Wednesday and - taking a moment out to be extremely serious now - if you're eighteen or over I really, really, really hope you're going to vote tomorrow. Remember that no matter what problems you have with our current political system, refusing to use your vote doesn't mean you're refusing to play the game, only that you're stuck in the game with everyone else, but simply not taking your turn.

Women fought and died for our right to vote in this country. Those women are all too often forgotten about, pushed to the margins of history, or defamed and denigrated as 'too extreme' or 'too violent' today, even though without them it's certain nothing would ever have changed. It was LESS THAN ONE HUNDRED YEARS AGO, in 1928, that all women were finally granted the right to vote. There are many places where women and other oppressed groups still haven't got any say in their own democratic process. So it's precious. It's a right we were denied for too long. Don't throw it away, please.

Read you later, chums!
Posted by Zoë Marriott at 00:11 No comments: