Hello, hello, hello Dear Readers! Happy Tuesday to all - I hope everyone's having a good week so far. My week is definitely looking up, since I've had some fantastic news today.

I'm basically just posting to tease you this week, but I hope you'll forgive my need to share my excitement - because I've had confirmation that the cover art for The Hand, the Eye & the Heart is FINALISED and that I will be able to share it NEXT WEEK!

I love this cover so much, you guys. I've loved it since I saw the very first, very rough design idea, even though it was in bizarrely in black and white. Walker has really outdone themselves this time. They commissioned the absolutely legendary artist Kate Forrester to illustrate and hand-letter the cover, and every detail in her artwork is so respectful to the cultures the book draws on, and so beautifully and directly specific to this story. My first impression was that it looked like some kind of wonderful ancient tapestry - and since the art of weaving is very important in The Hand, the Eye & the Heart, that makes my little heart sing.

And soon I will get to share it with all of you!

OK, so here are the details. If anyone reading this has been lucky enough to be invited to Walker's YA Wonderland: 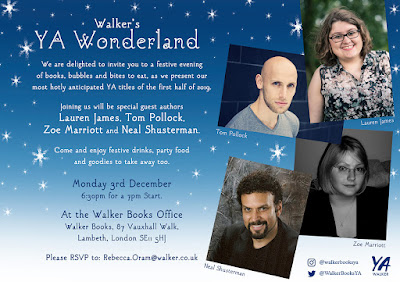 And you can make it, then on Monday of next week you will not only be meeting a bunch of cool authors and eating a bunch of delicious nibbles - you'll also be getting the very first, exclusive look at this cover art.

But don't worry if you're not going to be there. No, seriously - calm down, folks - would your faithful Zolah toy with her Dear Readers like that? Not only will all the bloggers present be tweeting what they see under #WalkersYAWonderland or #WalkerYA2019, but I'll also set up a blog-post all ready to go on Monday too. As soon as the presentation is over I will press 'Publish' and share the full cover on the internet in all its hi-res full-wrap glory.

Stand by on Monday evening to be BLOWN AWAY. I can't wait!
Posted by Zoë Marriott at 00:57 3 comments:

First up is a playlist for a long-time project that observant Dear Readers will know I've mentioned (and even posted snippets from) before: Winterthorne. Although it's actually not called that anymore, but the playlist still is:

And then a newer playlist which is very blandly called Thinking Music 2, but is actually for the very newest idea that I'm still sketching out whenever I have a spare minute or a random brainwave:

Apologies for the cr*p formatting here. Pasting in code always messes Blogger up and for the sake of my blood pressure I have learned to accept it. Anyway, I hope these help to get you into your writing grove, my lovelies! More poetry next week, maybe? Let me know your thoughts in the comments.
Posted by Zoë Marriott at 01:09 1 comment:

Email ThisBlogThis!Share to TwitterShare to FacebookShare to Pinterest
Labels: life the universe and everything, Music, Writing, writing playlists

Hello, hello, hello, Dear Readers! I've been super busy with a couple of different projects over the past couple of weeks (one book related, one life related) and forgot to post last week. Sorry about that.

But today at last - the promised poems!

You know how sometimes your dog or cat will have a 'mad hour' and go from peacefully snoozing on the end of the bed to running around in dizzy circles, thudding mysteriously under the furniture, trying to climb the curtains, and scrabbling at imaginary ghosts in the corners? Well, early this year the exact same thing happened to me, except instead of my cat or dog it was my brain, and instead of trying to eat my own tail I wrote poetry.

Look, just go with me here, all right?

As a teenager who was bursting with ideas and thoughts but had not yet developed the ability to finish a longer piece of work (I couldn't even complete short stories) poetry was my number one means of creative expression and refuge. I sometimes wrote three new poems a day, for weeks at a time. I loved poetry and it was as natural to me as breathing.

But when I started channeling my writing juice into novels, slowly but surely that flood of poetry slowed down to a trickle. Those who've read my books know that there are often songs and poems and ballads in there, but those are about expressing things about my character's world or feelings, rather than about putting my own thoughts and feelings onto the page. Up until January, February and March of this year it had been probably a decade since I wrote any poetry that came directly from me, rather than filtered through the lens of what a character was going through.

Then, during the snowy and miserably cold early months of this year - well known and hated by all Britishers under the name The Beast from the East - when I was stuck on Selkie Book (having had to drop it really abruptly when edits for The Hand, the Eye & the Heart appeared) and quite often also stuck on a train for long periods, travelling back and forth to my Fellowship in York, that closed sluice gate on my poetry brain creaked opened juuuust a tiny bit. I found myself scribbling lines of poetry, then verses, and eventually full poems. By the end of that miserable weather system I had a good handful of new stuff, which I worked on fitfully while I slowly got back to work on Selkie Book again.

And then I saw a notice that the Bridport Poetry Prize was open for entries. And I thought 'What the Hell?' I picked out my favourite four poems, worked on them feverishly for a week or so, and sent them off. Lo and behold! They did not win. But I still really like them and feel especially fond of them because that poetry gate in my brain seems to have creaked shut again now. So I thought I'd share a few of them with you now.

Ophelia,
the wild iris embraces you
though he would not.

And you are silent now
but the wind singing in the moon-grey bullrushes,
and the rising heron
speak your name.

Ophelia,
you are shrouded
by reflections of the sun.

And dragonflies shall take flight
from the ivory cage
which imprisoned your frail human heart.

Ophelia,
as your face fades
from his memory,
do not fear.

The green river remembers the green girl.
The waters know who you are.

People who tell you
That time heals
Are liars

You'll figure out how to do the impossible
How to live now
Dress yourself again
Make coffee, make jokes, make a bed

But time cannot regrow what was lost
And sometimes, years and years later sometimes
When you had grown so adept at telling yourself
That you had forgotten

Or moved on
Or achieved closure
Or whatever vacuous thing the liars call it now
You will speak, unthinkingly

And then you will feel the agony
Of the phantom limb, and know