Apologies for the long delayed nature of this long promised post. I don't have the spoons to spin it into any kind of coherent (let alone amusing) narrative right now, but suffice it to say that the arrival of the puppy heralded a great deal of anxiety, stress, sleep-loss and drama, and I've been lucky if I've managed to scrape together even an hour on my computer on any day for nearly a fortnight. Attempting a blogpost probably would have finished me off.

Much of this stress and drama is connected to the puppy's health. He managed to eat half a puppy collar - complete with spiky plastic clasp - while at the breeders and didn't vomit it out until he'd been with me, and miserably ill, for three days. It was nearly four times the size of his tiny stomach, and as a result it did a lot of damage inside him. Getting it out in one piece was kind of a miracle. It could have been much worse. But it was still pretty bad. He's been in and out of the vets for x-rays and other treatment and had to be admitted for nearly 48 hours due to dangerous levels of dehydration.

But he's on the mend now, and since he's actually dozed off in daylight hours (for more than five minutes!) I thought I'd better hurriedly put this together while I had the chance - or else you might not get it at all. Like any new parent, I'm currently getting up around every two hours in the night (toilet training: it is Hell) and I might doze off at any second.

So, let me introduce you to Ruskin: 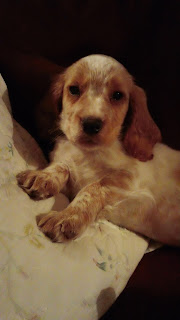 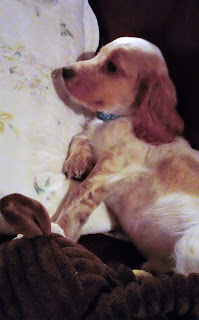 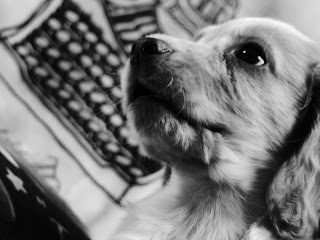 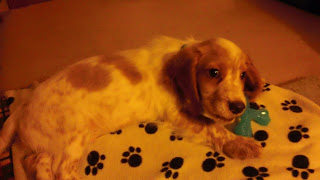 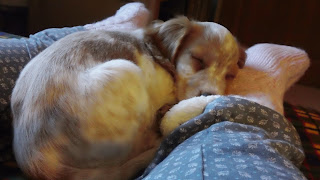 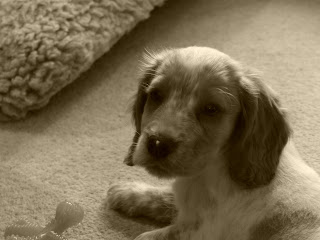 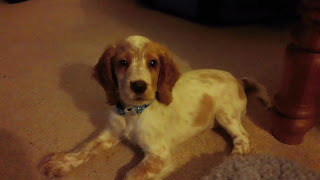 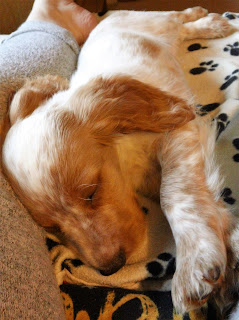 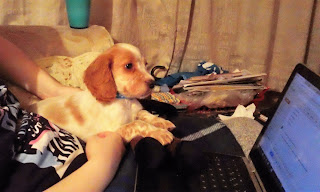 I went with Ruskin because I thought it looked like it fitted him, and I'd just re-read Diana Wynne Jones' The Year of the Griffin (thanks for reminding me, Phoenix!) which features a small, gingery character of that name. I've actually been *calling* him Finn about half of the time, but he doesn't seem to mind too much.

Now that he's doing better I'm hoping to start work on my WIP again, which I'm excited about - although I'm trying not to be too excited, since puppies laugh at the best laid plans of men, and often piddle on them for good measure. Wish me good luck with that, muffins! I'm pretty sure I won't be posting again for a while - unless something really interesting happens, of course, and I just HAVE to post - but I promise I will be back with you as soon as I can.

Pray for toilet training success, everyone!
Posted by Zoë Marriott at 09:48 6 comments:

Hello, delightful readers! I know I said I'd be absent for a bit - and I'm going to be, never fear - but I just had to come back and let you know this wonderful piece of news that I've been sitting on for ages. And I mean aaaaages.

You may recall that in 2011 the wonderful Royal Literary Fund - an institution dating from 1790 and supported throughout the centuries by such luminaries as Dickens, Thackeray, Kipling and A. A. Milne - made me an incredibly generous grant when I had just lost my job. This enabled me to continue to care for my father full-time during the slow and painful decline of his last years, and also to write and publish THREE books during that period, which kept me relatively sane. Those books, most probably, would never have been written without the Royal Literary Fund's support.

"Writers work one-to-one with students in universities, using their expertise in language and communication to help them develop their essay writing. Writing Fellows are appointed based on their literary merit and aptitude for the role..."

Basically the RLF matches really good writers up with really good universities, and the university gives the writer an office of their own and access to a computer and the internet, and (usually two days a week) the writer has appointments with students to just help them get it. Help to pass on all that extremely hard-earned knowledge of how language actually works and how to use it effectively to convey your ideas, to students of all ages, races, interests and abilities.

As someone who has written literally hundreds of thousands of words right here on this blog (and thousands more on other blogs) trying to understand and explain All About Writing, the RLF Fellowship is something I really approve of and believe to be not only worthwhile but probably *vital* for students to reach their full potential. In 2016, ninety-one Fellows worked in fifty-six universities across the nations of the UK.

I've emailed the RLF to ask for application forms for a Fellowship on two previous occasions and, both times, I chickened out. It felt a bit cheeky to be putting myself forward when the Fund had already done so much for me, and, what was more, I have no teaching experience or qualifications and didn't even go to university (as I talk about here). How in the world could I imagine that I was good enough for this sort of 'Fellowship'? It even sounds important!

But back at the beginning of 2016 something snapped, or maybe clicked for me. Instead of timidly requesting the forms for a third time and chickening out and sadly tucking them away uncompleted, I applied my own writer's skills and did some research. I spoke to some current and past Fellows that I was lucky enough to know. I watched the videos on the RLF website, and I read every single bit of information on offer there (which is a staggering amount, actually). Then I talked to some people who weren't Fellows, but did run writing courses or had been to uni - and this might have been the most useful bit of all, because those people assured me that, based on the way I wrote about the technical aspects of writing on my blog, they were sure I had what it took to do such a job. 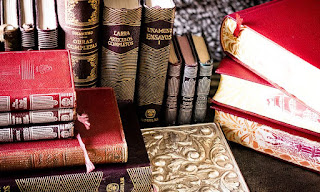 So I started to fill in the forms. And as I did, I suddenly remembered that during the nearly ten years I worked as a civil servant I had been *constantly* mentoring and teaching people. I was always the first to volunteer to help train the new staff, and I always loved doing it. Often mentoring people wasn't even any kind of an official role - I just went ahead and did it because I could see that they needed help and I knew I could explain what they needed to know in a way that would really make sense. Sometimes my managers would appreciate this, and at other times they told me off for taking time out of my 'official job role' to teach people to do things in all these new-fangled ways that weren't on the official training hand outs. Sometimes the official trainers would come to me on the sly and ask me to help them write new official hand outs because 'Everyone knows you're really good at this...'

I did it because it's a part of me: I can't stand to watch anyone fumble about in the dark if I can shed a bit of light. And the best part for me was always watching that moment when someone who'd been confused or worried or upset suddenly just got it, when they lit up that darkness themselves with new understanding... man, that gives me shivers just talking about it. It's the best.

So I filled everything in, wrote all this down, and sent it off and waited really, really nervously. I could not BELIEVE it when I got an interview in August, or when the very nice man who interviewed me basically said right then and there that he thought I'd make an excellent Fellow. I needed to keep it under my hat until it was officially confirmed, but unofficially: I'd made the grade. 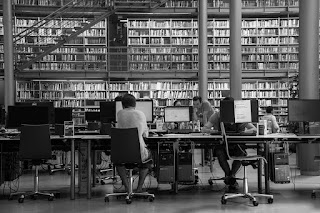 Well, it's now been confirmed that I should get a posting in a university this Autumn (although I don't know which one yet) and so it felt about time to share the news with you. I'm excited and apprehensive and expecting to learn just as much as I teach, which is how I know I was really right to apply. And oddly enough, I'm actually looking forward - among other things - to being a part-time writer again for a bit. To not only having a steady income (yes, definitely looking forward to that) for at least a year (and maybe more if I'm lucky) but also to being able to see my writing less as a routine day-in-day-out job that I must do six days a week, and more as the joyful part-time activity that I fit in around other things. Like it used to be. I think it'll be fun.

That's it for this week, Dear Readers! The WIP is going well, and you'll hear from me next week on Puppy Day, but after that it'll probably be a while - so take care! xx
Posted by Zoë Marriott at 05:35 16 comments: