Hello and happy Tuesday, Dear Readers! Today I was planning to do a post about world-building - but over the weekend I read THE BEST BOOK and I just had to share a recommendation and review with you all. 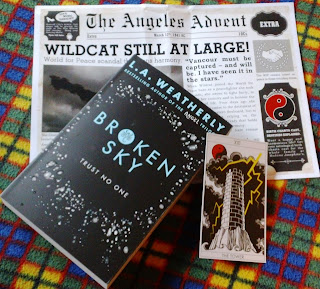 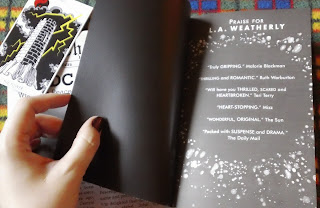 The book in question is BROKEN SKY by L.A. Weatherly. Now, Lee is a friend of mine - I talked to her about the story while she was writing it, and she was kind enough to score me an advanced copy, which I was pretty excited to read. But I've been so busy that Saturday was the first time I've had a chance to pick it up.

I pretty much didn't put it down again for...er...six hours? I read it walking the dog, I read it in the bath, I read it while I was stirring a pot of soup, I read it during my dinner...

I read a lot of YA and children's books. A lot. But BROKEN SKY has that rarest of qualities - it feels utterly fresh and unique. Set in what at first appears to be an alternate history version of the 1940's, with all the delightful Noir-ish trappings you might expect (diners, speakeasies, fighter planes, radio broadcasts and jazz music), we soon come to suspect that this is actually OUR world - but in the far future, after a nuclear apocalypse which threw the technological development of the human race back into the dark ages.

Following centuries of painfully clawing back civilisation, the human race decided: no more war. Now a neutral body, World for Peace, oversees all disputes between territories and countries with absolute fairness. No armies, no bombs, no death. The outcomes of such disputes are decided via thrilling aerial dogfights between 'Peacefighter' pilots - the best of the best - from each territory, in souped up fighter planes. The aim is to force your opponent to bail, but without killing them.

It's a set-up that is brought vividly and beautifully to life by the first person viewpoint of our heroine - Amity, otherwise known as 'Wildcat' - one of the best Peacefighters the Western Seaboard has. Scarred by a tragedy which destroyed her childhood, Amity's passionate devotion to the Peacefighter Corps and its ideals is not surprising. She's serious, focused, and dedicated, with a brilliant quality of moral resolution that I admired (I loved the fact that, even when things fell apart, she didn't blame herself - she knew she'd done what was right). Reconnecting with her childhood love, Collie, and imagining another life with him, after they both retire, doesn't really impact on her devotion to the ideal of 'A peaceful loss is better than war'. It was her grandmother and her father's ideal before her, after all.

Which makes it all the more horrifying for her when she learns that the Peacefighter Corp is, in fact, corrupt down to its roots. Not only do they routinely fix the outcomes of fights which decide the fates of millions, they also murder any Peacefighters that don't play along. A horrified Amity discovers that World for Peace have been firmly in the pocket of an insane, astrology-obsessed dictator, Gunnison, for at least a decade. Gunnison has already imposed his vision of 'Harmony' on his own territory. Now he's plotting a violent takeover of Amity's country (and the world), destroying everyone who opposes him. The Corp's betrayal rips Amity's life apart - and exposes secrets from her own past.

Adding depth and a shivering sense of creepiness to this powerful narrative are third person sections from the PoV of Kay, a cynical astrologer in Gunnison's territory who lies, schemes and manipulates her way into a favoured position in the dictator's government. Although Kay is despicable - a sort of inverse shadow of Amity's moral resolve, strength and integrity - she's also all too easy to sympathise with because her fears are completely reasonable: it's not hard to imagine how desperate YOU would be to avoid being sent to a 'correction camp' and question how far you might be willing to go to achieve a place of safety.

Forced to go on the run - hunted everywhere not only by the traitorous agents of the Peacefighter Corps, but also her own countrymen, as they fall under the sway of Gunnison's teachings - Amity desperately fights to get the truth out and protect her family and Collie. The story winds up to a devastating ending with a sucker-punch twist - setting things perfectly in motion for the sequel, Darkness Follows. I really admire authors who have the courage to set up layers and layers of elaborate world-building and make sure their universe is perfectly realised... before they take a hammer to it (ala Garth Nix and the destruction of the Wall in his Abhorsen books). It's harrowing in the very best way.

BROKEN SKY is so good, people. So, so, soooo good. Honestly. It's out today. GET IT. Then come back and tell me what you thought. But no spoilers (you'll know what I mean when you get to the end)!

Good morning and a very happy Wednesday to all, Dear Readers. Today's flying post is to offer all of you a heartfelt thank you for your response to yesterday's post.

When I 'officially' announced that BAREFOOT ON THE WIND was available for pre-orders on Amazon and said that the more people who ordered it before publication, the better it would be, I really hoped that a few people would respond. But I had no idea that within twelve hours, I'd see this:

This makes me feel so hopeful and so grateful to you all, Dear Readers. On a personal level, it's amazing to know that people are anticipating something that you've created, that they want to share it with you. And, on a business level? It's not just me that will be happy and excited about this. Hopefully my publisher will be too, which, as I said before, increases the chances that there will be more books by me available for you to enjoy in the future. It can make such a difference, guys. YOU can make such a difference.

Massive hugs to everyone who read, RTed or shared yesterday's post, and massive hugs and smooches to anyone who scrounged down the back of the sofa to find the cash to pre-order BAREFOOT ON THE WIND. I really hope that you'll enjoy it :)

As a special thank you, here's a short sneaky snippet from the book (which I'm currently editing, so the final version may be a tiny bit different). Click the cut to read it!

BAREFOOT ON THE WIND PRE-ORDERS ARE LIVE! (And other news)

Hello, and Happy Tuesday, Dear Readers! I hope you've had a great weekend and a good week so far.

The title of today's post might seem a bit confusing, since I announced as part of last week's blog that pre-orders for my next book were now possible. But a lot of people seem to have skimmed by that bit in order to get to the good stuff further down - at least, I assume so, because when I mentioned it on Twitter everyone was really surprised and shocked! So I thought I'd do another, proper announcement with a few key facts about the book. Here goes!

BAREFOOT ON THE WIND, my eighth novel, will be out on the first of September this year. You can pre-order it here.

The book is a re-imagining of the classic faerytale Beauty and the Beast. In my version, instead of a beautiful young noblewoman volunteering to be a hostage in an enchanted castle in order to save her father's life, we have Hana: a sturdy and pragmatic village girl, who takes to the enchanted woods that surround her village home in order to hunt down the terrible beast which terrorizes her people. It's one of my favourite things that I've ever written, probably because Beauty and the Beast is my second favourite fairytale of all time (after 'The Wild Swans') and also because I had to wait four years in order to finally get the chance to make the story I envisaged a reality.

The book is an official companion novel to Shadows on the Moon, set in the same fairytale Japan, called Tsuki no Hikari no Kuni.

There's more detail about the thought processes that went into the story here, this is where you can add it on Goodreads if you want, and you can listen to the writing playlist I used here. And this is the Pinterest board, for good measure.

Just between you and me, guys, the more pre-orders we get for this book the better. So if you were thinking of ordering/buying this book at some point, and you think you'll have the money to cover it when it's released in September, do me a massive favour and put your order in now. You will be helping to improve the chances of there being more books from me for you to read in the future, and, in addition, I will owe you an epic smooch (collect any time!).

In other - rather lovely - news, this Sunday (the 28th) between 5-6pm I'll be participating in the Guardian Teen Fantasy Twitter chat, hosted by Emily Drabble. Other authors participating are Sally Green, Samantha Shannon, Alwyn Hamilton, Taran Matharau and Lucy Saxon. Anyone can tweet us questions about YA, fantasy or both under the hashtag #GdnTeenFantasy. I hope to see some Dear Readers there, so please don't be shy and chip in with whatever questions or comments you might have!

Next week I'm going to try to (at long last) produce a post about the art and craft of world-building, so if you have any questions related at that, toss them at me on Twitter or in the comments. Read you later, my muffins!

Hello, my lovelies! Happy Tuesday to you all - I hope your week so far is shaping up promisingly. I've got some important stuff happening later on this week, so any crossed fingers, eyes, legs, paws or other extremities would be very much appreciated.

Today I'm sharing some lovely news that took me by surprise at the end of last week when Ann Angel (editor of the Things I'll Never Say: Stories of our Secret Selves anthology, which contains the Shadows on the Moon prequel story 'Storm Clouds Fleeing from the Wind') contacted me and the other authors whose stories are in the book to let us know that not only had Things I'll Never Say been selected for the CCBC Choices 2016 List but also that it had been longlisted for the YALSA TeensRead Teens Top Ten (that page hasn't been updated with the 2016 list yet, sadly). The last time anything of mine was longlisted for the Teens Top Ten was in 2009 or 2010 - I can't exactly remember - with Daughter of the Flames. 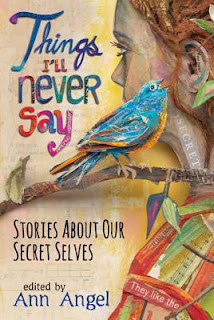 I admit I felt a little disappointed that the anthology didn't get much attention when it came out last year, especially because I believe my story in it, which my American publisher recommended for a James Tiptree Jr. Award, is one of the best pieces of writing I've ever done (not to mention my first ever published short story). So I'm delighted to learn that it did make a few ripples on the surface of the pond. If you haven't read it yet or hadn't heard of it before now, it's a great time to grab it via Book Depository or from your library and learn what the fuss is about.
Posted by Zoë Marriott at 02:00 3 comments: