Hello, Dear Readers! Happy Wednesday to you all. I'm back today to pick the winner of the signed copy of the frankly thrilling UKYA Dystopian novel THE FEARLESS by my friend Emma Pass.

So I popped all the entries into the random number generator and (drumroll please) the winner is...

Congratulations! Now, I'm pretty sure that you've won prizes on the blog before, but just in case you are a different Eleanor or you've changed your address, I'd still like you to email me at z d marriott (at) gmail (dot) com to let me know your full name and where you'd like your signed copy of the book posted to. I really hope you enjoy the book, Eleanor.

For all those who didn't win, fear not! More giveaways - The Name of the Blade themed giveaways - are hopefully imminent, so you will have chances to win other lovely prizes later on.

Hello, oh lovely readers! First, apologies for the radio silence over the past couple of weeks. I've been struggling with some health issues and doing maaassive amounts of research for my new Beauty and the Beast story, and I've just felt too tired out to come up with anything interesting to ramble on about. But I'm popping my head over the parapet to bring you this simply marvellous guest post from my friend Emma Pass who, oh yes, also just happens to be the author of one of the best UKYA Dystopian novels ever written, ACID.

Her ever-so-very-exciting new release THE FEARLESS hit the shelves on the 24th of April. She's currently in the middle of her blog tour, and we're today's hit. Check out the variety of other cool posts as listed below: 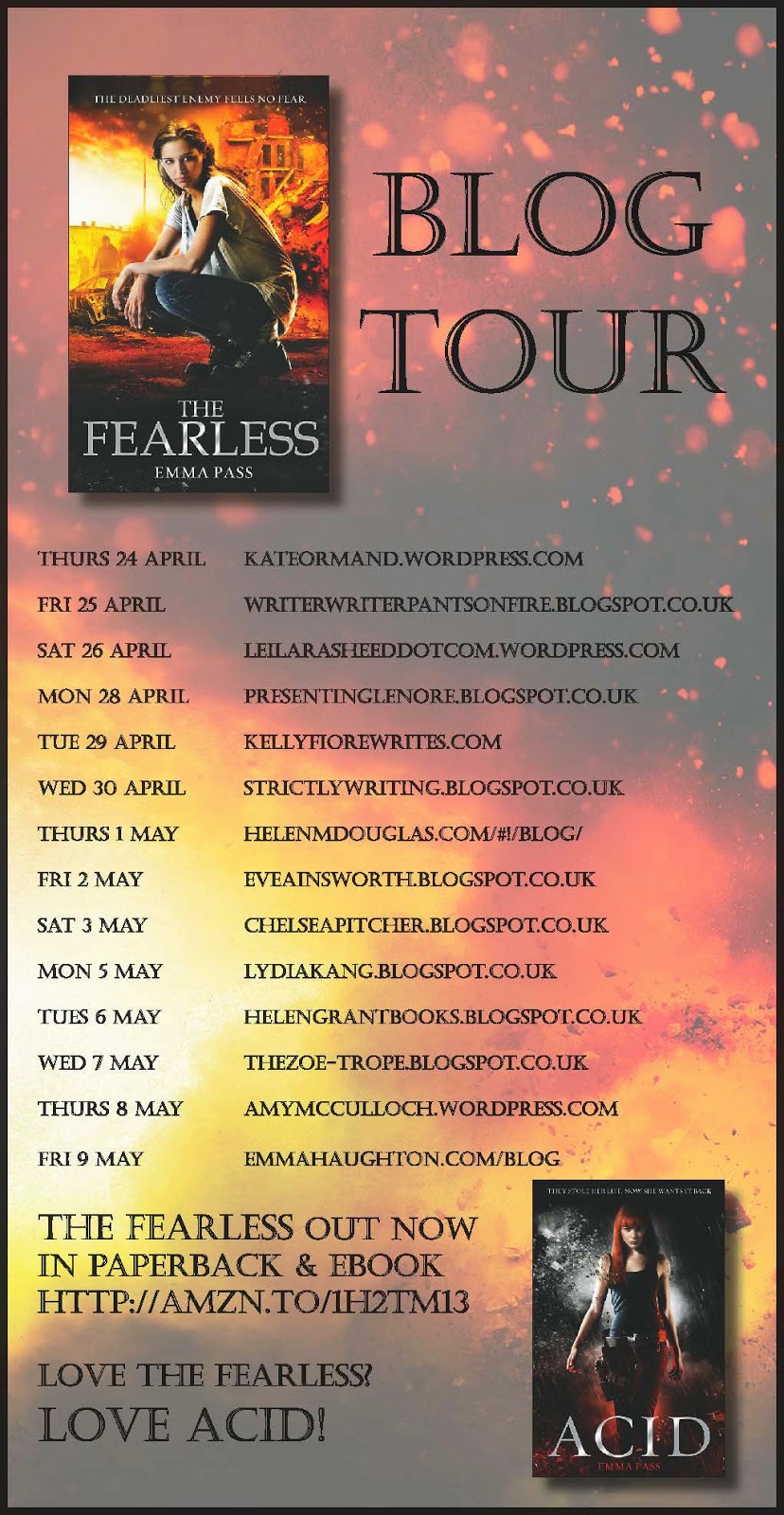 But before I let you dive into Emma's post - wait! She's also been lovely enough to offer a signed copy of THE FEARLESS as a prize to anyone who leaves a comment on this post. You get an extra entry if you RT, but you'll need to pop the hashtag #thefearless in there so I can find your tweet and count it. This is really worth having, guys - I'd love a signed copy of this book (much as I love my Kobo, it's not quite the same). You have a week to enter - I'll pick the winner via random number generator next Wednesday. And here's a fun fact: the cover photograph was taken by Larry Rostant, the same genius who created the new covers for The Name of the Blade!

Sometimes, when I tell people I wrote a dystopian novel, and that my second novel is post-apocalyptic, they say, 'Oh, dystopia! It's so fashionable right now, isn't it!' or, even worse, 'But isn't everyone sick of dystopia these days? There's so much of it about!'

Well, there is. And it has become a trend – a huge trend, with many different stories looking at many different scenarios. But I never set out to write dystopian and post-apocalyptic novels because it was fashionable. I first had the idea that would become ACID in 1994, when I was fourteen years old. YA wasn't even a genre back then; as a teenager, I remember going from to Sweet Valley High and Point Horror straight to adult novels. But I'd always had a fascination with what if? I grew up in the shadow of the Cold War and the four minute warning, and I remember as a young child feeling incredibly anxious about the threat of nuclear attack. Reading books like Robert Swindells's Brother in the Land, a post-apocalyptic children's novel looking at life after the UK is hit by nuclear bombs, helped me feel like there might be some hope should such a disaster ever occur – that people might be able to survive.

So, when I was fourteen, and a friend and I challenged each other to write a story about someone in a sinister future world escaping from prison and trying to stay one step ahead of the police, I never stopped thinking about the idea, even though I initially gave up after a few chapters. I came back to it a few times, trying it as an adult novel, but it didn't work until I discovered YA. Several novels later – one of which got me an agent, but not a book deal – I started thinking about my prison story again. Why not try that idea as a YA novel?

At that time, I'd been seeing a lot of things on the news about the UK that made me uneasy. In 2009, the Shetland Islands, a group of islands more than 100 miles off the north-east coast of mainland Scotland, and one of the smallest local authorities in Great Britain, had more CCTV cameras than the San Francisco Police Department. Shops are able to tag products, allowing them to keep track of where these products go so the stores can monitor their customers' lifestyle habits. And did you know Tesco are installing face scanners at petrol stations so that screens can play targeted ads at people? Scary, huh?

As I read more stories like this, I started to wonder what life in the UK would be like if the authorities really did watch everybody all the time. What if they controlled everything about our lives – where we lived, where we worked, who we were in a relationship with, even what we ate? What if they controlled the internet, replacing it with a state-run intranet a bit like the Kwangmyong network in North Korea, where everything uploaded onto it is controlled by the authorities? And what if the government had been replaced by a police force who were in charge of everything, and who locked people up for the slightest transgressions? When I started writing ACID, the world was in the grips of the financial crisis, so it didn't take much to imagine a situation where the UK government had been ousted after failing to deal with the country's debt, allowing ACID to take over and isolate the UK, now known as the Independent Republic of Britain, from the rest of the world.

Dystopia might be a trend, but it's become a trend for a reason. I think books that look at dark future scenarios speak to us because we want to try and make sense of all the terrible things that are happening around us in the real world, while feeling like there is some hope for the future. Stories that show a heroine or hero fighting the system that oppresses them helps us do this. So while  trends in fiction might wax and wane, I think there will always be room for dystopian stories – just like there will always be room for stories in any genre. Long live dystopia!

Emma Pass has been making up stories for as long as she can remember. Her debut novel, ACID, is out now from Corgi/Random House in the UK, and from Delacorte in the US. It won the 2014 North East Teenage Book Award, was shortlisted for the Doncaster Book Award, nominated for the 2014 CILIP Carnegie Medal and has been longlisted for the 2014 Branford Boase Award and a Silver Inky Award in Australia. Her second novel, THE FEARLESS, is also out now in the UK from Corgi/Random House and will be published in the US in early 2015 by Delacorte. By day, she works as a library assistant and lives with her husband and crazy greyhound G-Dog in the North East Midlands. Find her online here: http://emmapass.blogspot.co.uk/
Posted by Zoë Marriott at 00:15 8 comments: