The Hand, the Eye & the Heart 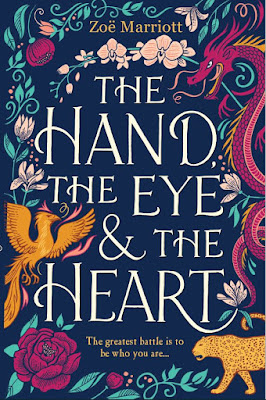 Q: When is the book due out?

A: It'll be available from the 4th of April 2019, but you can pre-order it now from Amazon, Waterstones or any good indie bookshop - and pre-orders really help a girl out, so if you can afford it, please consider it!

Q: So is the main character really trans?
A: I think of their gender identity as falling under that umbrella, and wrote them with the intention of presenting them to my readers that way - personally, I believe Zhi to be what contemporary westerners would probably call gender fluid or maybe, more broadly, non-binary. But readers are free to interpret the character's gender in any way they like (so long as they don't try to say that they're cis! Definitely not cis).

A: I've been lucky enough to have advice from several trans people at different stages, including two sensitivity readers who are both *brilliant* writers in their own right. We connected with one of these through the fantastic organisation Inclusive Minds. I've tried my absolute best to act on and incorporate every comment or suggestion they made. I also had really valuable help and advice from several readers (and friends and family members of readers) of Chinese and East Asian heritage, and one Chinese sensitivity reader who is also a professor of English (so intimidating). All these people have absolutely made the book better - more nuanced, truthful and respectful. There are probably still mistakes and things in it that could be improved, and I take full responsibility for those areas.

A: I identify as queer, yes. But I don't really think that writers should have to offer up a list of their marginalised identities on demand as part of discussion of their work, so even though I'm happy to talk about my queerness at other times, I'd prefer not to go into it now. I will say that this book should not be called #ownvoices.

A: It's a bit over 100k, in the same general length bracket as Shadows on the Moon.

The Goodreads page, the Spotify playlist for the book, and the book's Pinterest.