Hello, Dear Readers! I hope you've been having a lovely winter solstice season (or summer solstice, if you're on that side of the world). A quick update for you on the future Zoë-Trope mascot. Here are some pictures and a video that the breeder sent on Christmas Eve: 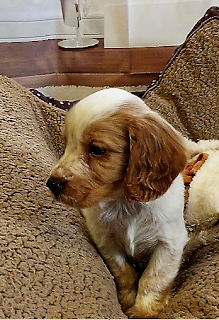 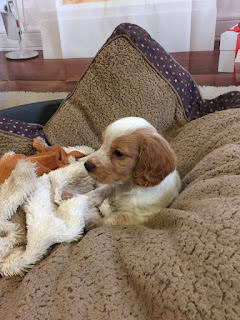 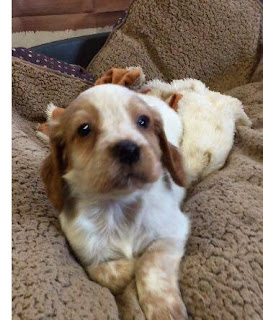 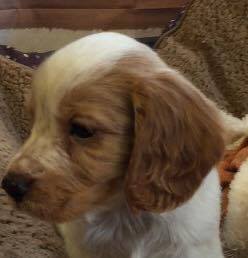 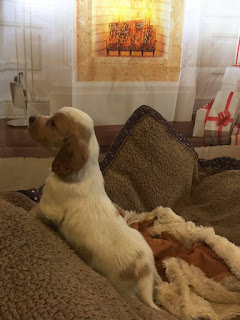 (Scroll up and down to see all the puppies)
You can see how much he's changed, just in the past couple of weeks - not only in the way he looks but in his confidence. He's already got so much personality for such a tiny puppy. I'm really excited (and scared, as well, just slightly) to finally get to meet him. A couple of weeks ago I felt a bit panicked and unprepared, but at this point I'm incredibly eager and just want January to come.

Thanks to everyone who commented on the last post, voting for favourite names or offering new suggestions. At the moment I've definitely got one particular favourite among all the potential names I listed and that's what I'm mentally calling Puppy Marriott. However I don't want to commit to it here yet, since - as I said in the last post - sometimes you meet a dog (or a baby! This happened with my middle niece) and the nice shiny new name you had picked out all ready for them simply doesn't fit.

This is probably the last update I'll post for a while (unless the cute overwhelms me again). I'll let you know when the puppy arrives and post some new pictures then, but I expect to be pretty sleep deprived for a few weeks after that until house-training is mostly in place - you can't really expect a new puppy to hold it for more hours than months they've been alive at first, so I'll probably be getting up every two hours or so to avoid accidents and ingrain the message that he goes to the toilet OUTSIDE.

And since I'm typing, a work update too - Codename: DtH is currently going really well. I had a startling brainwave about a particular character and plotline a week ago - it seems much longer! - which has already yielded all kinds of interesting stuff for the story. This is making me keen to get as many words down as I can before the blog mascot arrives and my writing time takes a temporary nosedive, which is the main reason the blog will be quiet *before* Puppy Day.

Read you later, muffins!
Posted by Zoë Marriott at 10:44 4 comments:

Email ThisBlogThis!Share to TwitterShare to FacebookShare to Pinterest
Labels: codename: DtH, life the universe and everything, Photographs, Videos

(Yes, there are three exclamation marks in the title - that's how excited I am. Deal with it).

Hello and happy Friday Dear Readers. This'll be my last post for a little while - as usual I'm taking some time off from blogging over Christmas. I'm hoping to get a chunk of work done on the WIP, which is actually going really well right now, for a wonder...

*Pauses, waits to be struck my lightning...*

Anyway, Christmas and the WIP are one reason I'm taking a little time out of the blog, but the reason I probably won't be back until mid-January (and possibly rather inconstantly after that) is given away in the post title:

Or rather, puppy, singular.

After losing Finn I felt convinced for a couple of weeks that I could never have another dog again. Then I started to think I would have another dog, but that it would have to be at least a year. But by a few days later I was missing having a dog in the house so acutely that I was making and deleting emo Tweets and FB statuses in the early hours of the morning. Messing around with my new hair didn't help. Writing didn't even help. My house felt empty and, despite my cats, I felt lonely.

And right around then, as sometimes can happen when the universe is feeling benevolent, the right opportunity fell into my lap. A spaniel breeder whom I followed on Facebook had one last litter to a dog whom she praises all the time as a perfect friend and companion (I've got both this breeder's books about spaniels and have read them cover to cover) and it was bigger than expected, leaving two spare puppies. One was snapped up, but the other was rejected at the last moment because the potential adopter decided it was too close to Christmas. And so, in the second week of January, one of these puppies will be coming to live with me!


Guess which one? Oh, all right - I'll put you out of your misery! It's the orange and white little pup in the centre of the frame. The one who snoozes through the entire video and only stretches when another puppy lands on them. He's a little boy, and he's a working type cocker spaniel.

More cute stuff! This is him at three weeks (a little bit older than in the video): 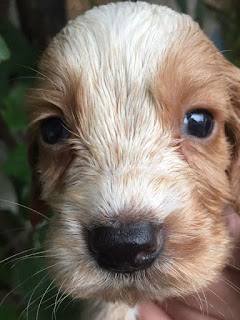 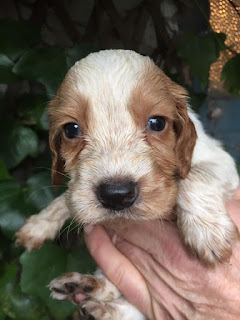 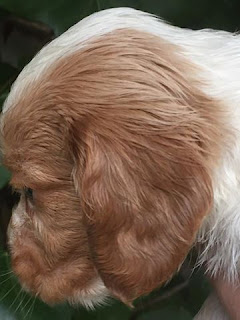 And this is him now, at around four weeks - he's the second orange and white puppy out of the kennel, and the one who figures out that he doesn't need to crowd into the second bowl along with all the others:


I'm debating over names at the moment. At first I thought Cazaril, after the protagonist of my favourite book, The Curse of Chalion by Lois McMaster Bujold. But no one I met got that, and after having to explain it and the pronunciation to everyone (well, except one person - hi Liz!) I imagined myself having to do the same on every excursion and dog walk for the rest of forever and gave up on it. My current shortlist is:
You can vote in the comments if you like, or make other suggestions. I don't promise to pay attention though. Finn was supposed to be called Bramble, but then he turned up and just wasn't - sometimes the dog picks the name for you, so we'll see.

Merry holiday season to you, my lovelies, and a happy New Year. See you on the flipside.
Posted by Zoë Marriott at 00:59 15 comments: 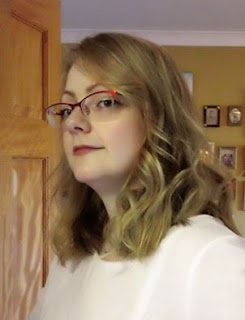 Yep, this is me. I went out and got it done the day after I posted; I had reached the point where if I didn't get it cut professionally, I might have been tempted to have a go with the kitchen scissors (or snap and just rip it out with my bare hands). This is option two, basically, with some added layers in the front. A few pictures of me throughout the week - apologies for the terrible photo quality and lack of make-up in most of these:

I am looooving how washing and conditioning and combing out my hair takes about five minutes now. I used to actual-facts *dread* it because just making sure I had all the stuff out of my hair at the end used to take about fifteen minutes, and that was if I didn't accidentally dip it into any sudsy bits in the bath. Combing it through after washing? Another fifteen minutes, plus a detangling spray and leave-in conditioner. I don't think I really understood how much hassle it all was until I didn't have to do it anymore. At this length it takes about five minutes to rough-dry it with a blow-dryer, and perhaps three hours to completely air dry. At the previous length blow-drying (not anything fancy, just getting it dry-ish) took around 30mins. Air-drying was an all-night process - I'd sometimes wake up to find it was still damp.

I'm also having fun discovering all the new hair things which have been invented since the last time I dared to do anything interesting with mine. When your hair is really long you worship the fickle god of No Damage. You're terrified it'll all go horribly wrong if you so much as look at it funny. I blow-dried my hair less than once a month and probably used any kind of heated tool on it about three times a year. Having found a few products that worked on my hair half a decade ago, I stuck to them religiously and never wavered, just in case. My hairdryer was brought for me as a Christmas present about fifteen years ago and I kept on using it because it said 'Ionic' and 'Protect' on the box.

But apparently loads of fun stuff has been happening while I was playing Sleeping Hair Beauty (or would that be Rapunzel? Answers on a postcard). Like amazing products for your hair that don't make it feel sticky or crunchy yet hold your style in place! And cool appliances that you can use to make your hair do all these new things but somehow don't fry it! And looks that are less about being perfect and more about being a bit quirky and messy!

So anyway, it's been fun playing around with it. I might keep it at this length for a while, maybe experiment some more - just so long as I can keep the option of throwing it back into a ponytail, because that's a lifesaver some days.

Mainly what I wanted to say was: getting your very long hair cut doesn't have to be a big deal, so if you, too, are hesitating? I recommend you go for it. Your hair is not you. It's not even the best part of you. Take a risk. But make sure you have a great stylist! Good luck, cuties.