Barefoot on the Wind 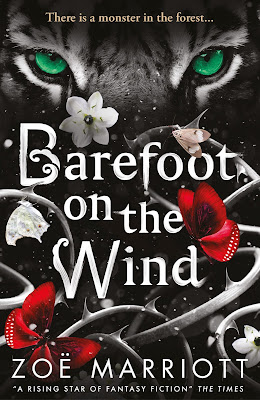 BAREFOOT ON THE WIND is a companion novel to Shadows on the Moon, set in the same fairytale version of Japan, although the two can be enjoyed in any order and will still make sense.

Amanda Craig (reviewing it for Scoop Magazine) said: "Beautifully written and imagined, Barefoot on the Wind is not just about romantic love – it’s about family, and confronting your deepest fears. Like all the best fairy-stories, it ends on a note of unexpected joy... if you love Studio Ghibli films like Princess Mononoke, this is for you."

Samantha Shannon (author of The Bone Season series) called it: "Just fantastic. A dreamy, chilling reimagining of Beauty and the Beast."

You can read a free excerpt of the novel here, and add it on Goodreads here.

The idea for BAREFOOT ON THE WIND arrived in my head while I was in the shower one day. Mid-way through shampooing my hair, a voice - grimly resolute, insistent - spoke the words: 'There is a monster in the forest'.

I was hooked. I knew exactly who this person was: Beauty. And the monster she spoke of? It had to the the Beast, of course.

And she was going to hunt him.

Beauty and the Beast is one of my favourite fairytales, probably because of the combined influence of Robin McKinley's seminal retelling Beauty and Disney's legendary animated Beauty and the Beast, both of which I discovered at about the age of eleven, and which confirmed my desire to mess around with fairytales for a living.

But because I'd read and seen so many amazing versions of the story, I never really felt that I had anything to add. Not until later on, when I began questioning some aspects of the story from a Feminist perspective (as I am wont to do).

The story's supposed to be about learning to love people for who they are inside, right? About the importance of seeing past the surface to the true beauty within. A handsome - yet cruel and uncaring - Prince is turned into a Beast as punishment for his shallow ways and told that until learns to truly love, he will be stuck that way.

But in most traditional versions of the tale, the Beast is never required to learn that lesson at all. He actually continues to act just as cruelly and callously as ever, first threatening and blackmailing Beauty's father, then keeping an unwilling Beauty prisoner and trying to bully or manipulate her into marrying him so that he can get his old life back. Even when he 'frees' Beauty, it's only for a week - she's got to come back and never ask to leave again - and as soon as she goes he begins starving himself so that when she does return, she feels overcome with guilt at his pitiful state and gives in when he asks her to marry him for the 300th time.

It's Beauty - the kind, innocent young girl, guilty of no crime at all - who is forced to learn to care about the Beast and attempt to see some inner beauty in him, despite both his frightening exterior AND his terrible behaviour. Her reward is being stuck with him forever.

It doesn't really make any sense.

So in my version I wanted to turn the story on its head, and investigate how things would turn out if agency was given back to the heroine of the piece. What if she chose to enter the enchanted forest and confront the Beast? What would drive her to do this and what would be her goal? And how could I prove that the Beast HAD learned his lesson, and that he did deserve to be freed from his curse?