Hi guys - I hope you're having a good week so far (or if not, that it looks up from this point).

The Massive Reviewer Reward Giveaway is over and everyone except one person has their prizes, but if you didn't win there's no need for despair. I'm currently running another giveaway for three signed copies of BAREFOOT ON THE WIND on Goodreads, so anyone who couldn't enter the first giveaway for whatever reason stands a chance of winning there. Check it out.

More good news: this lovely review from Amanda Craig in the new SCOOP Magazine, in which she calls the book 'Beautifully written and imagined' and all sorts of other nice things.

Now for... not so good news. This week some results came back from the vet and gave me a diagnosis that I never, ever wanted to see. Finn has cancer. It's lymphoma, which is treatable (thankfully I kept on stubbornly paying his insurance premiums, year on year, even though they've gotten to the level of ludicrous and lately I've had to make some hard choices about paying the insurance vs. my grocery bill) but not curable. What that means is that he'll have veterinary chemotherapy, designed to ease any symptoms and make the patient comfortable without too many side effects, but not to actually extend his life if it will make him suffer. I might get a few extra months with him... but at the end of that time the cancer will come back and that will be the end of the road.

I'm taking him to hopefully start that treatment today, and I'm praying that he will respond well to it and he'll get as much time as possible with the best quality of life possible before I have to let him go. My dad used to joke that Finn was his favourite grandchild, and he spent so much time playing with and training him that I felt as if he really belonged to both of us. They shared the same personality - mischievous, silly, inquisitive, clever, gentle and affectionate. Even Finn's occasional bouts of selective deafness and pigheaded stubbornness remind me of dad. Facing the prospect of losing him is... pretty bad.

Anyway, if things are rather quiet around here for the next little while, you'll know why. I'm still hoping to take part in NaNo - writing has always been a solace and source of comfort to me during the worst times, and I will definitely need something else to think about. I'll try to check in again at least a couple of times as November progresses and let you know how it worked at the end of the month. Anyone else who is doing NaNo this year is super welcome to add me as a buddy over on the website.

Any good thoughts and good wishes you might have spare, Dear Readers, will be much appreciated. I think Finn and I will both need them. 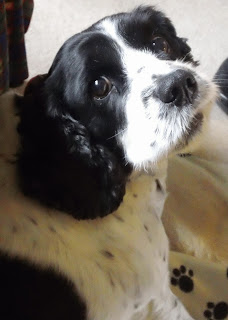 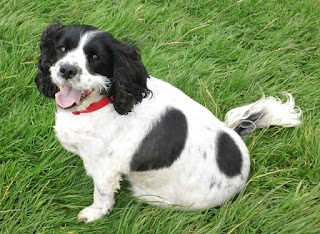 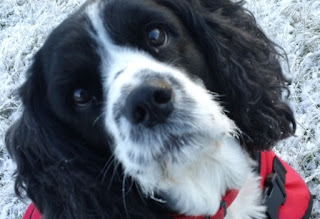 Hello, my little macaroons! Happy Wednesday to everyone, and thank you for joing me today. I'm delighted to say that I have pretty pretty pictures to share - because in the last week not one but TWO delightful parcels have arrived for me bearing gifts.

What was in package number one, you ask? Why ask no further, because it was THIS: 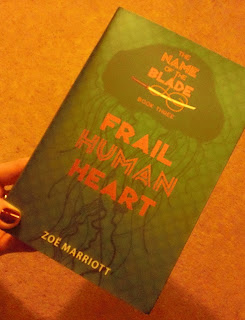 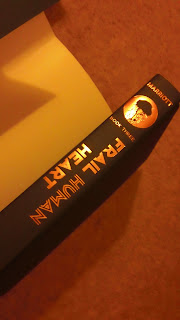 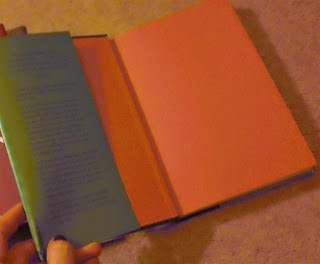 The final volume of the Candlewick Press hardback editions of The Name of the Blade Trilogy! A rather lucious jade green this time, with a scale effect and copper typography - and matching green binding with copper foil and endpapers.

And yes, that's a jellyfish in the silhouette. If you've read the book you know why, and if not then you'll just have to buy this and find out won't you?

But even better than that! 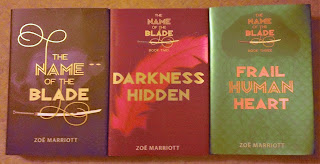 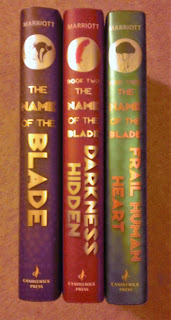 Together at last. My fourteen year old self, if she could see this, would be actual-facts-ugly-crying. I nearly did myself. The trilogy is now officially completed and it's so beautiful!

But wait - there's more. ALSO in the post last week was THIS: 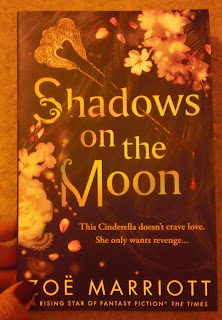 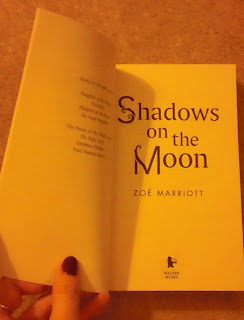 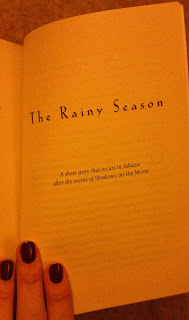 Yes, that's a glimpse of the long-awaited sequel/short story/epilogue of Shadows on the Moon, which I hope will satisfy fans of the book at last. But this book, too, is part of a set, so it seemed only right to do this: 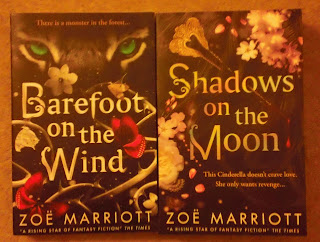 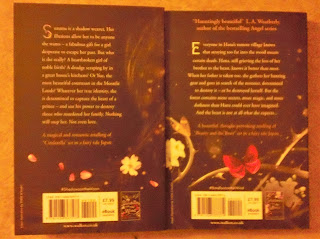 Look what they did with the back covers there - isn't that clever? It's almost like the tangle of thorns transforms into a swirl of hair in the same gust of wind the sweeps the cherry blossoms across from one book to another. Gorgeous!

Frail Human Heart will be out in the US at the beginning of November. This new and improved version of Shadows on the Moon will be out here in the UK at the same time.

Once they're both on the shelves... I'm sure not what'll be next for me. I'm out of contract now - I have no new books due out for the first time in a decade. I'm still working on the book I got my Arts Council grant for, and I'm hoping to make a giant leap in progress during NaNoWriMo this year (yes, I'm going to give it another bash, no, I never learn, and yes, I will keep you all abreast of my progress - in fact, why not join up too and friend me here?) but I don't know when or if that will be published. I have some other news about my future which I'm hoping to share soon, but I need to get official confirmation first. Apart from that it's all wide open, which is both scary and exciting. 2017 is going to be an eventful year, I think!

Email ThisBlogThis!Share to TwitterShare to FacebookShare to Pinterest
Labels: BaBBook, Barefoot on the Wind, Big Secret Project, BotW, Darkness Hidden, FRAIL HUMAN HEART, Good News, NaNoWriMo, Photographs, Publishing, Shadows on the Moon, The Name of the Blade, The Night Itself

Hello, my lovelies! Happy Thursday to you all. Today I bring you the reveal of the winner for the MASSIVE REVIEWER REWARD GIVEAWAY. First up through - if you've reviewed on Amazon and you haven't sent me your address yet? Email me through my website contact form here and let me know it. I'm hoping to get all the Reviewer Rewards out over the next week or so, but obviously that depends on me knowing where to send them!

OK, so at about two minutes past midnight last night I assigned everyone who reviewed on Amazon or Amazon.com a numerical value. Then I fed the numbers into a random number generator and it picked one out. Who is it?

Hurray, hurray! Congratulations Rachel - I very much hope you will enjoy your prize. You've already sent me your address for the Reviewer Reward, so I'll try and get your (expansive) package out to you in the post in the next week. Part of the prize includes delicious chocolate treats, so if you have any allergies, intolerances or strong likes/dislikes, please let me know (in the comments here is fine)!

In other news, BookTrust have picked BAREFOOT ON THE WIND as one of their October Books We Like and have given it a lovely review, which you can check out there. Obviously I'm delighted (and hope it might cause a few more copies to fly off the shelves).

And another reminder that YAShot is approaching with all the speed of a feral runaway warthog - although the event will of course be much more enjoyable (and more fragrant!) than that. I believe there are still tickets left, but not many, so if you want to get in do it NOW.

Read you later, cookies!
Posted by Zoë Marriott at 00:55 3 comments: