BLOG TOUR ROUND UP!

Hello and happy Friday, my lovelies! I hope your week's been delightful so far, and if not, that you're prepared to pamper yourself over the weekend to make up for it. Today (as the title suggests) is a round-up of all the wonderful blog activity on THE HAND, THE EYE & THE HEART's marvellous tour so far. Frankly, I've just been blown away by this, so let's dive right in.

Monday's post was a musical tribute to the book by Alex at The Paperback Piano which is just unspeakably beautiful.

Tuesday's stop was gorgeous Dear Reader Hannah, founder of Luna's Little Library, who engaged in a fairly awe-inspiring chapter by chapter breakdown of her reactions to the book - sometimes hilarious, sometimes heartbreaking, sometimes spoilery (you have been warned!)

On Wednesday Laura Patricia Rose contributed a fashion spread of just the loveliest outfit (that I would definitely wear) inspired by the book. Bird belt inspired by Bingbing: 10/10.

Thursday we were blessed with Charlotte from Wonderfully Bookish Blog's beautiful, atmospheric and spoiler free image/mood board which is a very interesting insight for me, personally, into the visual impressions a reader might glean from my writing.

And we're closing the week out with Kirsty's endearingly nerdy yet gorgeous Anagrammatical Shenanigans (that's the only term I feel is fitting).

The blog tour continues right up until release day, so I will be rounding up again next Thursday as part of my release day post. I urge you not to wait that long to check these fantastic posts out, though - I'll be sharing and RTing during the week and I'd love it if you did the same to build excitement and buzz, not only about the book's publication but also our fantastic #UKYA blogging community.

And as if that wasn't enough excitement, my lovely publisher Walker Books are currently running a super exciting giveaway on Twitter - you can win not only a copy of the book but also a stunning Chinese calligraphy brushpainting set. UK Dear Readers can win by following them here:


EXCITING COMPETITION ALERT! Want to win a copy of 'The Hand, The Eye & The Heart' by @ZMarriott alongside a stunning calligraphy set?  Follow & RT to enter! By entering this competition you confirm that you accept our terms & conditions of entry (see t&c link in bio). pic.twitter.com/JJ44GvAl3i
— Walker Books (@WalkerBooksUK) March 27, 2019

If you're not in the UK then you should definitely be checking back here on release date for a post about the book's journey and also a new, international giveaway which maaaaaay be of interest...

I've been getting messages on Facebook and Goodreads asking me if I'll be doing any signings for this book, so even though I've been banging on about this non-stop I feel it behooves me to remind everyone again that I'll be in London the week the book's release - on the 8th of April, right after my birthday! - to chat about the book (and other awesome books) with a raft of awesome, award-winning and bestselling authors at Waterstone's Piccadilly. We will also sign copies! AS MANY COPIES AS YOU WANT. Book tickets now so as to avoid the sad, frowning grey unicorn of disappointment!

Finally, perhaps it is time for another NEW and EXCLUSIVE SNIPPET of my precious book baby? Don't mind if I do, muffins! Read below the cut: 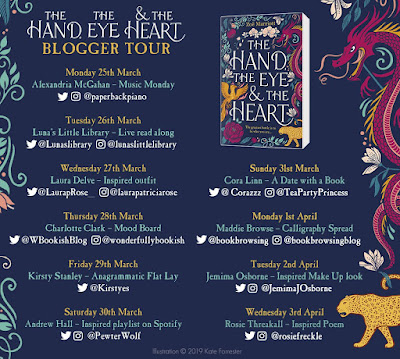 Hello, hello, hello, Dear Readers! Happy Tuesday to all, and I hope your week is off to a great start.

Over the weekend news has broken - at last - that I am to be part of the line-up at the Cymera Festival in Edinburgh this summer; so now I can finally talk about it!

This is super exciting for many reasons. Cymera is Scotland's very first literary festival for science fiction, fantasy and horror. It's partially organised by the wonderful Laura Lam, who is a long-time Twitter-friend of mine and frankly a marvellous writer and all-around jolly good sort. The list of attendees and panels is fantastic, and includes the aforementioned Laura Lam, as well as Elizabeth May, Richard Morgan, Lauren James, Tom Pollock, V.E. Schwab, Samantha Shannon, Tasha Shuri, Charles Stross, Aliette de Bodard, Dhonielle Clayton, Justina Ireland, Zoraida Cordova, Helen Grant and - I am not kidding - literally dozens more.

Finally, I will be doing my panel - which is scheduled for Saturday 3:34-4:45 and is on the theme of Eastern Inspired Fantasy - with New York Times Bestselling Natasha Ngan, author of my FAVOURITE fantasy of last year, Girls of Paper and Fire (read my review).

I cannot WAIT for Cymera. Edinburg is such a beautiful city, the festival is going to be full of people I both like and admire, and I get to meet Natasha Ngan and talk about books and writing with her! I'm pretty sure it's going to be in my top three favourite things I do this year. I hope plenty of northern Dear Readers will be able able to make it - but if you want to get tickets, better act now, they're selling up fast.

Don't think you'll be able to make it up to Edinburgh in June and now feel kind of bummed about it?

On April the 8th I am going to be in London doing another bloody fantastic event at Waterstone's Picadilly with - *deep breaths* - one of my favourite people, Internationally Bestselling Samantha Shannon AND Zen Cho (author of The True Queen and Sorcerer to the Crown) AND Tasha Shuri (author of Empire of Sand).

The event - which is 'in conversation' style, meaning it will be super relaxed and chatty - will be chaired by Katherine Webber, fellow Walker author and writer of Only Love Can Break Your Heart. The panel is titled Queens of Fantasy (why thank you, Waterstones Picadilly) and runs from 7pm, with signing and general squeeing and hugs to follow.

I mean, I just... how amazing is this??? It's even on the day after my birthday! Like a very slightly belated birthday present!

Tickets are on sale now and since anything with Samantha in it pretty much sells out in about ten seconds, if you want to be there you should jump in quick.

I'm hoping that a nice chunk of Dear Readers will be able to make it to at least one (or maybe both? Both would be great!) of these. You guys know I live in a very out of the way locale and don't get the chance to do events as often as many writers - plus it's been a couple of years since my last release - and I'd love to catch up with some of you and celebrate the publication of The Hand, The Eye and the Heart.

Please come out to see me if you can! I promise that whether you chose Edinburgh or London, you'll have a lot of fun.