Hello and Happy Friday, Dear Readers! Today it's my very great pleasure to finally unveil the cover and synopsis for FrostFire, the companion novel to Daughter of the Flames! FrostFire is due to come out in the UK from Walker Books in July of next year.

First, what is the story about?:

Frost is cursed - possessed by a wolf demon that brings death everywhere she goes. Desperate to find a cure, she flees her home, only to be captured by the Ruan Hill Guard. Trapped until she can prove she is not an enemy, Frost grows increasingly close to the Guard’s charismatic leader Luca and his second in command, the tortured Arian. Torn between two very different men, Frost fears that she may not be able to protect either of them ... from herself.

FrostFire's characters were a first for me. They arrived in my head as a trio.

I was haunted by the outline of three situations which would define the characters. The first was of a pair of injured, lost people, talking to each other in the cramped darkness of a tiny cave while a river flowed by outside, confiding secrets that might never emerge in the light of day. The second was of a golden person with stars in their eyes, standing in ripples of sunlight, reaching out to someone else and givng them a chance to change their life, and the sense of fearful exultation that second person would feel. And the final one...that was the most emotional, the most shocking of all. But I can't tell you about that one, as it would spoil the whole book :)

I saw a sort of triangle of personalities, each of them vulnerable and broken in a different way, each of them extraordinary and heroic in a different way. I saw how the flaws and strengths of these individuals would both support and aggravate the others, causing them to love and hate one another in unique ways, and to change and grow and eventually - hopefully - heal.

FrostFire deals with all the issues that I never had a chance to explore in DotF. Betrayal on a fundamental level, betrayal by someone that you love, how, in the middle of a war, bad guys and good guys sometimes merge into the same thing, how it feels to love someone who is utterly beyond your reach, and the way that people can transcend suffering and horror and become true heroes.

So now that you've scrolled past all those boring paragraphs...here's the cover! 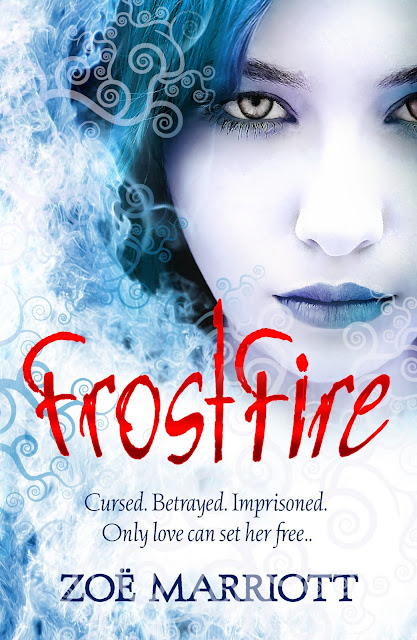 And can I just say? O! M! G! I love it! Love, love, love it. Like, it's my favourite cover of mine EVER. It's right in ways that you can't even understand unless you've read the book. The colours! The flaring blue flames! The WOLF EYES! When my publisher asked me what Frost, the heroine, ought to look like, I sent them these reference pics of a Native American actress: And they found a model who could almost be her sister.

And also? SWIRLS, baby! My own, my precious swirly bits! *Flails*

Oh, and just in case that wasn't enough to send me into a blissed out author coma for a week? When FrostFire comes out next year Walker Books are also going to reissue Daughter of the Flames with a brand new cover? You wanna see it? Yes? Yes? 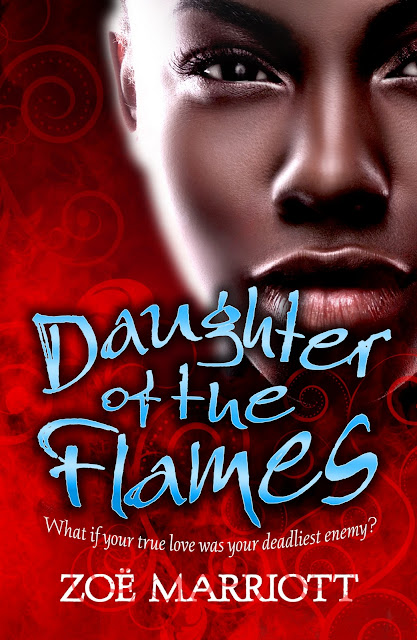 Heeee! #NoRacefail covers that accurately depict and celebrate beautifully diverse heroines? Oh yeah. Walker Books is all over that. I love my publisher!

P.S. Why yes, Dear Readers - that is the gorgeous Elizabeth May, writer and photographer extraordinaire, on the FF cover! Where can I find more of her haunting and lyrical photography you ask? Why, here!
Posted by Zoë Marriott at 03:25

Oooh! Glad I'm waiting for the new cover! :D They are both GORGEOUS!

OH MY GOD IT'S SO BEAUTIFUL
Zoe you must be sooo pleased!
It's just...wow.

Alex: I KNOW, right?! I nearly cried the first time I saw it. And by nearly, I mean, actually.

I want to save it to my computer just so I can look at it again and again. Wow. So pretty. Also, I love the font they use for your covers.

Alex: What's great is that they're using the same font on all the books - so that they have a feeling of unity - but at the same time they play with the typeface a little to make each book look unique.

I was just casually scrolling down to see what Zoe had blogged about today and then... FROSTFIRE HAS A COVER!!!

Anyway, it's completely gorgeous. You're so lucky to have so many gorgeous covers, Zoe! :) Congratulations!!!

Isabel: Heh heh - it does have a stunning affect, right? And now you've finally got the proper synopsis, too :)

So pretty, can't wait to add it to my bookcase <3

ProjectFreya: Thank you! Me too :)

Im in love! They are beautiful! I just keep staring at them! Im so off to amazon to pre-order! :D

Raimy: I only wish you could - but the links aren't up on Amazon yet. *Sigh*

OMG Zoe I absolutely LOVE the FrostFire cover!!!! It's beautiful & I can't wait to read it :o) I love the new Daughter of the Flames cover too - I may have to replace my copy when the new one comes out lol

Walker always create such amazing covers for you & I love the fact that they actually ask you what you think the characters look like & manage to match it up so well. I get really irritated with covers that look nothing like the main characters!

*Grabs Sarah's hands and dances around in a circle*: Right? Right? Walker are so good about this. I mean, obviously I can't always expect them to match up to what I say - it depends what photographs/art are out there and available to them. But they always ask and they really care about getting it right. So happy!

(Also, I just got DAUGHTER OF THE FLAMES from my library, yay! Looking forward to reading it very much!)

Deva: Thank you! Did you know, btw, that your very first comment on this blog was also a cover reveal? Back in 2010, for Shadows on the Moon :)

That's a beautiful cover, and the synopsis sounds amazing!! I cannot wait to read it, I love your books :)

Amy: Thank you! Just over seven months to go...

Zoe, hah, no, I didn't take note of that. Clearly I am highly motivated by shiny pretty things!

I really liked SWAN KINGDOM and based on RJ's reaction to DotF I have every expectation of loving it! :-)

Deva: Who isn't? :) DotF is really, really different from TSK, so it's always interesting to see who likes one but not the other, or who likes both. Let me know what you think!

I love the FF cover! Its so atmospheric and it reminds me of the music video from Wednesday's post. I was really surprised to read the synopsis for the book. I don't know what I was expecting, but I wasn't expecting that. It sounds even better than I thought and I can't wait to read about the tortured characters. I love your books :)
I still prefer the original DOTF's cover but that one is gorgeous. You must be chuffed! :)

Rebecca: Thanks - that's just the right word, atmopsheric. When you read the book, you'll see exactly how well it fits! The DotF cover also fights better, honestly. That's just how *I* picture Zira in my head. Although I do think the original cover is beautiful, the model is clearly Asian rather than black, which has always vaguely bothered me. So now it's fixed!

Eafiu: Thank you! Me either :)

*Faints* Okay, that has got to be, hands down the most amazing, gorgeous, beautiful cover EVER! I'm dying to read the book--and stroke the cover! :D

I'm definitely going to be using this one as one of my Lusting for Covers posts when I restart the meme on Jan. 1st. :D

Do you have a release date for the US? Though if it's like the other books, I might just buy it online somewhere from the UK because the UK covers are always so much prettier! I cherish my DOF and Swan Kingdom books (UK edition) that I received a few years ago. :D

Oh my word. That cover is absolutely gorgeous! I now cannot wait to read FF!

Will you be doing one of your trailers for FrostFire?

Amanda: Thank you! I hope you enjoy them :)

TBQ: I can't to get my hands on a copy myself - I want to snuggle it! I can't believe how lucky I've been with my covers, really. Not a dud among them. The US release date will *probably* be somewhere around April of 2013 (sorry! I wish it could be earlier) but you're right, at least there's the Book Depo :)

Nara: I've already done a basic sort of trailer for FrostFire - you can find it on my YouTube channel. Maybe I should put it on the book's page here, too...

So, so glad I decided to wait to see if DOTF would come out in pb State-side because I love the new cover direction. *coveting...importing...*

pretty...i want it noooooow! heck, i want them all with new pretty covers now. and they say you cant judge a book by its cover. i say epic cover + epic story inside= pure concentrated awesomeness. just saying.

Katie: Well, some epic books have sucky covers, to be fair. But when the cover designer is this talented, you definitely *can* judge a book by its cover!

WHAT?! I KNOW I COMMENTED! WHERE DID MY COMMENT GO?

I LOVELOVELOVE the cover! It's so beautiful! And I love the ongoing theme of swirls for all three books! AHHH!

I know I'm late on this but, OH MY GOD! I cannot wait for this to come out, it sounds amazing and the cover - wow. I see why you love it. It's so eye catching.
WOW.