Hi everyone - and happy Thursday to all! I hope you're having an excellent week so far, because I certainly am.

You might recall that back in March I told you about the Polish edition of Shadows on the Moon and shared the cover, which I had gotten off a European book website. I absolutely loved the cover artwork and was very excited about it. Since the release in April, I've had a lot of Google Alerts for Polish sites talking about and reviewing the foreign edition, which intrigued me even more (although the quality of Google's 'translate' function made it pretty impossible to tell what anyone was really saying).

But while it was in my contract that I should get some copies of any foreign language versions of my books, none arrived. So a little while ago I asked Lovely Lass about it, and this week she came through. I got the parcel containing the Polish books on Tuesday... and I am in love.

This is honestly the most beautiful incarnation that any of my books has ever had. It is the kind of book that I, as a book addict, would probably end up buying from the shop even if I had no interest in the contents, because it's simply THAT gorgeous.

Let me try to convey this with some images. 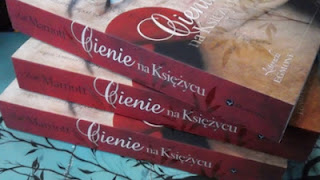 Look at the beautiful lettering on that spine. It's been treated with Spot UV, so it's glossy and shiny, and I love the way it seems to spill over from the spine onto the front cover. I also adore the way the red starts out vivid and bright around my name and shades gradually darker and bloodier toward the other end. 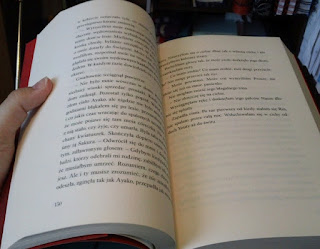 The covers and the page paper are both that luxurious, extra heavy stock which sort of flops open and stays there. You can bend the whole book practically in half. And it's not standard paperback size, either, but what I would call 'trade paperback', which means it has the same proportions as a hardback (I'm not sure if that's standard in Poland, but it's unusual in the UK). 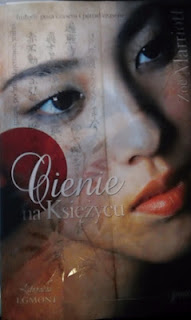 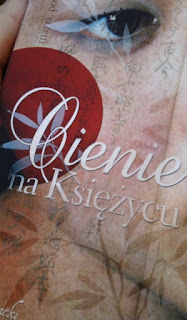 The outside of the cover has been treated it give it the most amazing, velvety texture. I've only come across this texture on books a couple of times before - normally on high profile, front-list titles. In addition, the bamboo leaf decoration is also picked out with Spot UV, and the ultra-glossy effect creates the most gorgeous contrast with the matt, suede-feel cover. 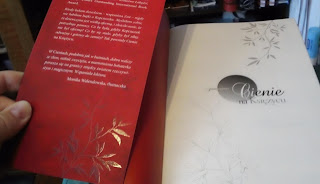 The gloss continues INSIDE the book, on both the front and back flaps. Oh, and that's another thing: French flaps! These are one of my absolute favourite things to find on a paperback. I adore them; a book with French flaps is almost irresistable to me. I never thought that a book of mine would get them because, again, they're normally saved for Mega Big Deal Titles. 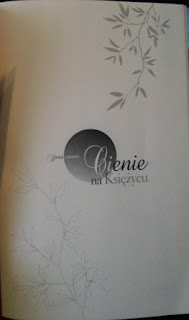 The bamboo silhouette continues onto the title page, both filled in and in outline, which again has the most beautiful subtlety to it. This decoration is on each of the section headers too.

Frankly, if every book that I ever write were to look exactly like this? I would be deliriously happy. I made the silly mistake of letting my mother see these, and she pounced and demanded one for herself but the other two are MINE ALL MINE and I shall be snuggling them forever more. *Sigh*

Now for another piece of news. Big Secret Project, aka my first ever urban fantasy story and my first ever trilogy, aka THE KATANA TRILOGY? Is going to be getting a new series title. It turns out that the word Katana has been copyrighted (or possibly trademarked? When I Googled it, it turned up a kind of golf club, so... iunno?) which means it's really awkward for Walker Books to publish a series with that name.

For about eight hours after Wonder Editor called me up to tell me this, I was a little bit flustered. I sent her a very long list of all kinds of other possible titles - many of which I liked, but none of which I really loved - and she went away to ponder them, and I went away to nibble on pencils and worry about it.

However, late that night as I was discussing it with a member of my writing group I suddenly had a brainwave and came up with what I personally thought was the perfect title for the trilogy. So I sent it off in an email and now I'm waiting for Wonder Editor's approval. But I'm not worried anymore, because it feels so right to me that I'm convinced the golf club people actually did me a favour.

And that has been my week so far! What about you guys? Tell me in the comments!
Posted by Zoë Marriott at 01:01

Beautiful look! Love it! I'm waiting the bulgarian one. :D

Borko: Oh, I wish so much that a Bulgarian publisher would buy it! I'm not in control of that, unfortunately, but we'd definitely say YES if someone asked!

That book is gorgeous!! I would be snuggling it too xD And I can't wait to find out the new name :D

The book looks gorgeous!
I hope everything goes well with your new title :)

That book is so pretty I may have to print out the photos just to be able to stroke them!
I'm looking forward to hearing more about this trilogy too.

Amy: *Laughs Evilly* I now have approval on it, but we are keeping it secret until... later. * Laughs fiendishly*

Rebecca: Thank you. And it has, no now I'm a happy bunny.

Kaylie: Everytime I pick one of them up, I have to stop and stroke it for a minute. I'm scared I'll wear the covers out. Hopefully there will be lots of juicy details about the trilogy later this year. The first book is out in 2013 in summer and they're on Goodreads now, so you can see the summary :)

Ah, good luck! Can't wait to hear the new title I didn't know you could copyright a word like Katana. It's such a silly thing to do. Just like how James Cameron copyrighted the term AVATAR, which makes ATLAB suffer, lol! Those are some really pretty covers! LOVE! I almost wish I had ANNA AND THE FRENCH KISS in paperback instead of HB b/c it has pretty french flaps with scallop edging *sigh*

Wow, LOVE those covers. The font on the spine is just gorgeous! And I'm really excited to hear what your new trilogy title will be.

Bonnie: Yeah, that was my thought... but I'm OK with it now, because it resulted in bonza inspiration. Scalloped edges on French flaps? Holy Crap! I think I'd pass out!

Emma: Thank you. It's crazy but I honestly feel more proud of this than any edition of my books that I can actually *read*. I'm holding the title back probably until I do the first cover reveal so... well, it might be a little wait. But it will be SO WORTH IT.

That's one insanely beautiful cover. It must be amazing to have different versions of your books.
I'm curious, did you have to ask to get copies of foreign covers, or was it a standard clause in your contract?


Has any of your books ever been translated into Dutch? I can't find any, but the net isn't always reliable.

Elyndra: Thank you - and yes, it is. I've got them all lined up together on my shelf now and I probably sit and look at them for a few minutes every day, just for the inspiration. I think it's standard in any translation contract that the author should get at least a couple of copies of the foreign books. Sadly my books have only been translated into Polish, though :(

Wow. Those covers are gorgeous! Like, I kind of want that edition, only, I wouldn't be able to read it. But it would look SO pretty on my shelf! Congrats for scoring such an awesome edition of your book.

Can't wait to hear what the new title will be. :)

Kristen: Ach, me too. If only I could learn Polish! (I couldn't. I'm rubbish at languages). And now that I've teased everyone, I do hope this title ends up being popular... *Bites nails*

That is a seriously pretty cover! It looks soft and velvety. (I totally didn't touch the screen in a failed attempt to feel the prettiness.)

Suzanne: Heh! I would too. Mmmm, velvety covers...