Hello, hello, hello Dear Readers - and Happy Thursday to all!

Today I've got a selection of random things to share. I hope you'll like some or all of them, so let's get started.

1) I could do without the large and annoying caption (and whatever you do, don't read the comments) but this little girl is amazing. Two separate people sent the video to me saying she reminded them very much of Mio, and since this is just how I imagined Mio fighting, it made my day.

2) Stuff for USian Dear Readers! The US edition of Darkness Hidden is officially available in hardback and ebook over there as of now, so if you've been patiently waiting for this moment - go forth! Also, my US publisher (Candlewick Press) have recommended 'Storm Clouds Fleeing from the Wind' - my Akira prequel story in the Things I'll Never Say anthology - for a James Tiptree Jr Award! This doesn't mean I'm actually in the running, that's up to the judges, but nevertheless, I'm thrilled. This award is about making people question their assumptions about gender and sexuality through fiction and I am 100% up for that.

3) The American School Library Journal are compiling a list of the 100 best Young Adult novels ever - and they're doing it based on a popular vote that anyone can take part in. Now, I don't know about you, but whenever a list of this type comes out I generally find myself torn between being amused, exasperated and infuriated because a good half of the books on it aren't YA or children's novels at all. They're classics written for adults that some people seem to think count as YA because... well, just because, you know, the leads are sort of youngish... and anyway kids should read them! Look, I love Pride and Prejudice, Hamlet, The Catcher in the Rye, The Great Gatsby and Wuthering Heights as much as the next person, and read most of them as a teen, BUT THEY ARE NOT YOUNG ADULT NOVELS JUST BECAUSE THE MAIN CHARACTERS AREN'T MARRIED YET DAMMIT. *Pants* Anyway, I headed right over there and voted for a raft of my favourite YA novels - and I hope you'll consider taking five minutes to do the same. If you happened to pop Shadows on the Moon (still my favourite of my own novels) into your list of faves that'd be brilliant too, but of course you don't have to! Just vote anyway.

4) Lately I've been making an effort to learn to cook lots of new (healthy) recipes and have been so impressed by my own efforts that I've been tweeting progress reports and pictures. By popular demand, I've decided to share one of those recipes here. I picked a nice simple one that's good for beginners but delicious enough for confident cooks. This recipe is actually all mine, so I hope everyone likes it! It's very healthy and has about two of your five a day in it.

I make enough for two with this, so I can have leftovers the next day. If you only want one meal, half the amount of ingredients. If you want to feed four, double them. Simplez!

Five large free range eggs
A splash of milk
A pinch of salt, a pinch of black pepper, and a teaspoon of dried oregano
1/2 of a red onion, thinly sliced
1 small bag of baby spinach leaves, washed
200g of boiled new potatoes, cut into 3cm cubes
200g of boiled sweet potatoes, cut into slightly larger chunks
A handful of crumbled feta cheese - about half of a small mug
A handful of sweet cherry tomatoes (Tomkin, Aromatic, Sunblush, whatever you like) cut into halves
A low fat cooking spray, or if you're not watching your weight, a teaspoon of butter and a tiny glug of oil to stop the butter burning in the pan
Optional: six to twelve thin slices of Chorizo.

First of all, cut up and boil your sweet and new potatoes. It should take about 20mins for the new potatoes - but only eight to ten for the sweet ones, so get the new ones in the pan first and then add the sweet ones later. When they're all cooked enough to slide off a knife or a fork when you stick it into them, but are still firm enough to hold their form, drain them and pop them aside in the pan, to keep warm.

Next, spray or butter/oil your frying pan and pop it on a medium high height. Wait until you can feel the heat of the pan when you hold your palm a few inches above the cooking surface, and then toss in the onions. You want to cook these until they're starting to go lovely and translucent and soft. It doesn't matter if they go a little brown but if they're starting to catch on the bottom of the pan before they look about done, tip in a little water - not too much! - it'll stop them burning and also generate some steam, which helps them cook faster.

When the onions are nearly done, empty in the baby spinach leaves. It's going to look like loads too much spinach - you'll think 'What have I done?!?' but don't worry. Another tiny glug of water into the pan and a few moments of stirring the leaves around and by the time the water has evaporated and the pan is dry again the leaves will have wilted down to about a quarter of their previous mass. When the leaves look shiny, dark and soft, all folded in on themselves, they're ready.

If you're quick at cracking and mixing eggs you can leave the pan for a second to do the next part. If you need a little more time or your hob is very hot, just take the pan off the heat for a moment. It's sensible at this point to make sure that the onions and spinach are evenly distributed around the pan because the eggs are going on top soon.

Crack your five eggs into a bowl, add the splash of milk, and the seasonings, and then whisk it all together until the mixture looks an even yellow colour. Then pour the eggs into the frying pan, and follow immediately with the sweet and new potatoes. Give them a nudge around so that they're evenly distributed across the pan as well. Then sprinkle the feta cheese all across the surface of the frittata (not putting a big chunk the section of the pan you've earmarked for yourself, because trust me, you won't end up getting that part and then you'll be sad. Fairness pays, kids!).

Leave the pan on the heat for a few minutes, watching it. When your frittata looks like this: 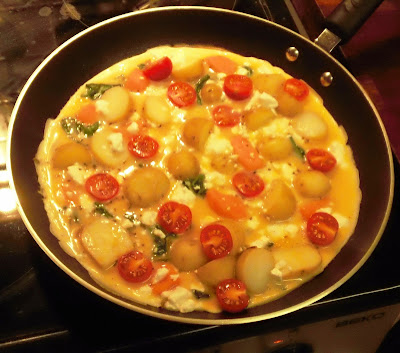 Eg. it's still a little gloopy and jelly-like on top, but a quick shake of the pan shows that the bottom has solidified, throw the cut up tomatoes on the top and then put the frittata under the grill (if your grill is slow to warm up, maybe put it on a few moments beforehand so it has time to warm up).

It should take four or five moments for the top of the frittata to solidify under the grill. Some people like to leave theirs under the grill until it goes really sizzly and brown on top, but if you do this chances are that the frittata will be solid in the middle. I like mine a little bit softer in the centre, more like scrambled eggs, so I take it out more quickly. This is just personal taste - do what pleases you.

Using a large spatula, cut the frittata in two and serve yourself and whoever is eating with you (or else fold the second half in two and put it in a Tupperware for tomorrow, which is what I do). 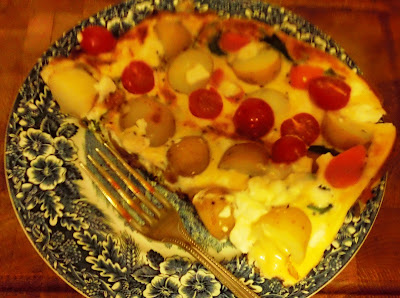 Sometimes, if I'm in the mood for something a bit meatier, I'll pop five or six thin slices of Chorizo in the oven and let them crisp up while I'm cooking the frittata, then put them on top of it once it's cooked. The Chorizo is super crunchy and salty and goes brilliantly with the cheese and eggs, but watch out - depending on how hot your oven is they really only need a few minutes, and one minute too long in the oven and you end up with charcoal, so don't get distracted!

Let me know if you try this and how it turned out. I might post more recipes in the future, since lots of lovely Tweeps keep asking me to - register your protests in the comments if it's not your thing.

Have a great weekend, duckies. I'll read you next week :)
Posted by Zoë Marriott at 12:59

Email ThisBlogThis!Share to TwitterShare to FacebookShare to Pinterest
Labels: Good News, life the universe and everything, Shadows on the Moon, Trivia, Videos

Shadows on the Moon is definitely still my favorite as well! I remember my sister and I getting my dad to read it when it came out and we all loved it (I also still have my rare copy with pink lettering!).

Isabel: That's so nice to hear! I have to say, though, I think when Barefoot on the Wind comes out people might love it as much - I definitely do, but obviously it's not published anywhere yet so I couldn't nominate that one.

Then I absolutely can't wait for BotW :)

I am definitely going to take a crack at that frittata. Husband, son and I all like egg things, and need more go-to recipes for when we forgot we will need to eat again soon (this happens with startling regularity)

Lily Cate: that's often what I use it for, too! The good thing about it is that if you don't have one or two of the ingredients you can easily sub in something else that you like (bacon for chorizon, sharp cheddar for the feta, butternut squash for the sweet potatoes) and it'll be just as good.

I've just voted for a bunch of my favorite YA novels (largely fantasy), including Shadows on the Moon and Daughter of the Flames! I made sure to get some Robin McKinley, Tamora Pierce, and Diana Wynne Jones in there too.

Phoenix: Heh - I voted for all those authors too :) Birds of a feather!