Hi everyone! This week I feel that we all (but especially me!) deserve a special pat on the back for surviving to Friday. Go ahead - you know you'll feel better.

It's been a challenging week. Monday's Mary-Sue post caused an explosive response, which started out awesome and positive but swiftly degenerated into a lot of people leaving comments and sending me emails telling me to do anatomically impossible things with myself and/or die. Some of those comments attacked other authors that I had mentioned in the post, a consequence I hadn't considered, and which made me feel (irrationally) guilty for bringing them into the line of fire. I've never had this many people even read a post that I'd written before, let alone reply, so it's all been a tad overwhelming.

As of now I won't be reading or replying to anymore emails on this topic from email addresses I don't know. I'm not even going to open them. And I can't keep up with the comment trail anymore either - it's eating my brain. Thanks to everyone who left interesting, thoughtful comments, whether you agreed with me or not. You may carry on with the discussion yourselves if you want to, with my best wishes.

Moving swiftly on, regular Dear Readers will know that I've been following the YA Rebels for ages, and simply love their vlogs. So when I found out that the Rebels were putting together a new line up and were holding open auditions for three spots, of course, I made a vlog and uploaded it. Here it is:

A reminder to that next week is...well, ME Week over on The Book Memoirs. I'll be linking you over to their blog every day next week and I hope that you'll click through to reward Kate and Elle for their hard work in putting everything together. They're going to be collecting questions from readers throughout the week and I'll be answering as many as I can on Friday, and there will also be giveaways, so it's well worth checking it out.

And now, onto today's real topic, which is:

Hello, my lovelies. It is now time to launch into the third part of the Turning Ideas into Plots workshop. 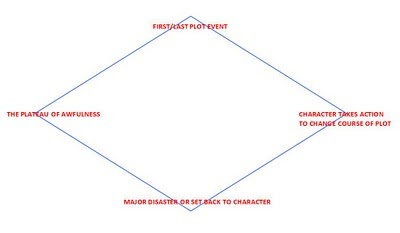 (For more information on what this means, flick back to Part #2).
You have enough solid story events now fixed in your head to be able to fill in two or three of the points on the diagram, which means you're on your way. You have, effectively, the skeleton of a plot. Possibly when people ask what you're writing about, you can give them a brief summary which touches on those main plot points, and they go 'Wow, sounds interesting'.

But you still don't have a STORY. Because the story is like the flesh, the blood, the muscles and skin that cover and fill the gaps between the bones. Without the story, the plot is useless.

This where that commonly held saying comes from that ideas are ten-a-penny, but execution is key. The execution of the story, the way you put those muscles together, the texture of the skin, is what turns your story either into a beautiful, vibrant, living creature - or a hulking, mouth-breathing Frankenstein's Monster.

To illustrate this, let's take a story that we all know well. Cinderella.

It's fairly easy for anyone to pick out how the main points of Cinderella's story fit onto the plot diagram I showed you. Hence: 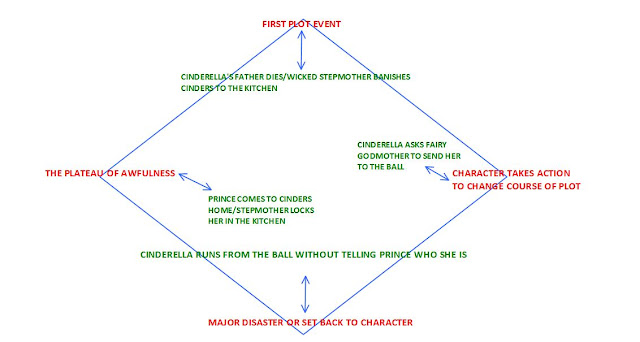 However, each of the sides of the diamond shape now need to be filled in with events which logically follow from First Plot Event to Character Action to Major Disaster and so on. If you and I were to both start out with that basic plot diagram above we would probably come up with radically different ways to get our heroine from point one two point two (hence what I was saying about execution being key) involving not only different events but different tones in our writing and character motivations. That's why this diagram is useful on it's own, even if you don't want to fill in anymore details - because it gives you that structure, that framework, within which to let your ideas develop.

However, the way I normally work this out is to try and fill in the first side of the diamond in as much detail as possible before I start writing. Then I put in whatever details I can think of on the other sides. Like so: 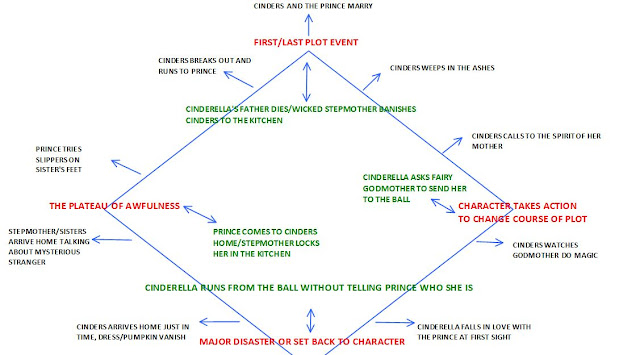 Because although I'm an outliner, and although I like to know in detail what I'm aiming for, how to actually write those events, what the character feels about them...that I like to make up as I go along. And usually I find that by the time in my first draft I've reached point two (Character Action) I've grown to know the world, story and characters well enough to be able to go on ahead and fill in the next side with a few more details too. The story teaches me about it as I go on. By the time I hit the halfway point I've got something that looks like this: 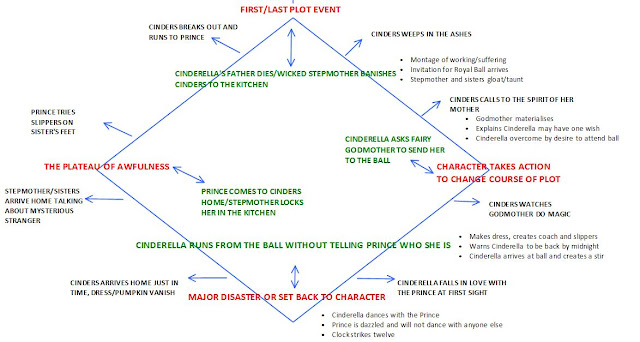 This is a story now, not just a plot. It includes scenes not just of action but reaction. It shows you what events I (as the author of this particular Cinderella retelling) think are significant enough to dramatise (lots of emphasis on the magic), how I'm going to handle the romance (love at first sight), the emotional significance of events (Cinderella calls to the spirit of her dead mother before the fairy appears - could it really BE the ghost of her mother?) and it makes you ask questions, rather than just being a bare list of events.

The way you chose to write these events - in a grim, gothic style, or a funny irreverent one, or a poetic lyrical one - will be the skin of your story. The outer appearance that people will probably react to first and with the most conviction, just as humans react to the colour and form of other people's outer shell in real life. But without the plot skeleton and the muscle, flesh and blood of the story underneath, the skin is worthless. All the bits of the story's anatomy need to be working together.

So, this is how *I* turn ideas into plots, and then a plot into a story. I hope it's been useful. Remember that the important thing - the only really important thing - is to work the way that helps you most and makes you feel most comfortable. Use a circle instead of a diamond. Don't draw at all, if you don't want to! There is no such thing as a 'right way' and anyone who says there is? Is talking like the B*tSh*t Crazy Lady (remember her?).
Posted by Zoë Marriott at 00:44

Totally and completely useful! This is just what I needed to read today. Thank you!!!!!

Becky: Hurray! You are very welcome :)

You wrote a great and inspiring post. Don't feel guilty for a minute.

Sarah: Thank you for repeating that to me six zillion times. It is getting through, I promise!

Thank you so much! I've hit a brick wall with my writing but now I feel like I have something to try and break that wall down.

Jenni: You are very welcome - best of luck!

Zoe: First of all, as Sarah Rees Brennan(!!) said, you have no need to feel guilty about your post on Mary-Sues. It's perfectly fine to disagree with a blog post, but to go as far as some people did (without even announcing their name) was simply rude and unfair to everybody else. Your post was really thoughtful and intelligent -- please don't be discouraged!

I really love that video. You always make me laugh! I was shocked about the pajama thing (and very disappointed!). I'm still doubtful about number three (hahaha!), but still, awesome video! I was hoping you'd do one soon because I always love your vlogs. :)

Like Jenni, I have also hit a dead end with my story, and have been taking a little break from it (yeah, I have been feeling EXTREMELY guilty, don't get me wrong), so I'm glad you decided to repost the plotting workshop series. Always very helpful!! :D

Really love the video and the post! This blog MUST have more readers. O, and I will be in England in couple of days and maybe I will knock on your door.

Isabel: Well, don't feel guilty about not writing, then! Remember my Take A Deep Breath advice! It really does work, you know. I'm glad you liked the vlog. Let's hope the YA Rebels do as well.

Borko: Ooh! Well, give me some notice first, I'll need to put on decent clothes :)

I am so jealous of Borko! Next time I go to England I might just drop by and take you out for some tea (with Walker cookies! Yum yum...). And then we can discuss writing. :D

In a couple of hours I'm off to Block Island to spend the weekend on the beach. :) I'll be back on Monday for Zoe Marriott week!

BTW I'm reading Starcrossed. Not very far into it yet, but so far it's really good! Hopefully I'll get a lot of reading done over the weekend.

Hi I'm back from my three week Outward Bound Course and I have been busy catching up with all the blogs I've missed lol :)

Rebecca: I think you should count yourself lucky you missed the Mary-Sue sh*tstorm!

I know, I couldn't believe how many comments there were. It'll take me ages to go through them all lol. Completely agree with you though!

Rebecca: Yay!! Glad you're back. :) Good luck catching up on everything you missed. I had like 100 emails when I got back from Africa. ;)