So, as the blog title kind of spoils... I finished the edits on DARKNESS HIDDEN! 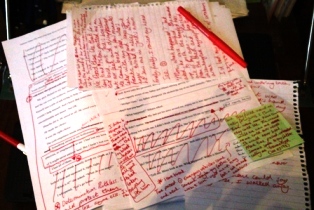 I'd given myself a deadline to try and send the edited manuscript out to both Super Agent and Wonder Editor before the end of the day on Friday, which was really tough because I was also looking after my father that day. But I worked like a crazed little beaver chipping away at a log, and managed to press 'Send' on the email before four o'clock. Only to get Out of Office autoreplies from both editor and agent. *Sigh*

This is an inevitable result of self-imposed deadlines, my muffins. It happens every time. Make a note for your future careers. EVERY. TIME.

However, I feel very positive about this latest set of revisions. The book actually has a new ending now - well, the same one, but vastly extended because the original version was really abrupt. I was so emotional when I wrote the ending initially that I honestly couldn't see what to do but to just end it there. Anything else was going to feel like anti-climax to me at that point. But luckily, that is what revisions are for, and because I know people have complained in the past that my endings are abrupt, I was really determined to keep thinking about it until something occurred to me - which it did, while I was on a train journey the other week. Good old trains. They're great for my creativity, even if they do regularly get cancelled on me, buried under landslides, delayed because of snow drifts... Anyway! During these revisions I cut over 10,000 words, but the manuscript eventually ended up about 7,000 words longer overall, which I like because usually when I start adding length during a revision, that's a sign I'm on the right track.

Of course, finishing the revisions on DH and getting that ending right, finally - we hope - filled me with enthusiasm for starting work on book #3 of the trilogy (I nearly gave the game away by typing the title there! Phew). I've tried to begin the third book several times but I kept getting stuck because I couldn't get a clear picture in my head of where Mio, the main character, would be emotionally after the events that finish DH. The new ending really helped me get there, and I wrote some rough notes on Saturday which translated into eleven pages of new stuff this morning. Hurrah!

Now onto other lovely things! First, an exciting announcement. I'm going to be in anthology. Here's the announcement in Publisher's Weekly. For those who don't want to click away, a screencap:

My very first! I'm really psyched to have been asked. There's a lot of exciting authors in there! Although the deal has been made, I'm waiting to get more details from the editor - Ann Angel - about what sort of content will be allowed before I can know for certain what short story I will write. However, at this point I'm leaning very heavily toward one that I know many of you will like: it concerns a character from Shadows on the Moon that a lot of people have asked to know more about :)

Next! Last week Luna of Luna's Little Library wrote the most lovely review of The Night Itself and gave it a Sunshine Star rating. Which was already extremely wonderful - but then she made this fanart: 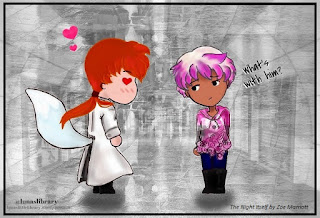 Jack and Hikaru! So adorable, I did a little dance. My babies! My messed up, emotionally-constipated babies!

Finally, here's a mini-interview that I did with the lovely author Kate Ormand (one of my fellow Author Allsorts) for her SNEAK PEAK feature. There's some inside information on the book AND a brand-new snippet for you. What more could you want?

That's all for today, so I'll see you on Thursday, when I will be talking about (drumroll please) InCreWriJul!
Posted by Zoë Marriott at 11:15

Email ThisBlogThis!Share to TwitterShare to FacebookShare to Pinterest
Labels: Darkness Hidden, Good News, Illustrations, Interviews, Publishing, Reviews, Shadows on the Moon, The Name of the Blade

Congratulations on all the good news! Some amazing names in that anthology - how exciting!

Thanks, Emma! It's a very exciting time all around - which of course means I'm freaking out about all the stuff I need to do. Business as usual :)

Can't wait for the InCreWriJul! :D

Rebecca: Me neither! Unofficially this year, I'm calling it Write Like a Momma-heffer Month.

That's so cool about the anthology! Somehow being asked to be in something like that feels like extra proof that you've really arrived.

Phoenix: Well, I don't know about that. Plenty of authors do four or five anthologies a year - that's when you've arrived, I should think. But it's certainly still nice to be asked :)

Ka: Thank you! And well done on managing those umlauts - I think that's a first on this blog.

I love that they all came from a haiku! I'm sooooooo excited about this series, ahh! <3

And...I need to put this anthology on my radar now. Ahh, and...Otieno!?

Bonnie: Yep. Like Shadows on the Moon. And FrostFire, come to think of it... haiku are really a brilliant way to try and distill down what the book *about*, so they're also good for coming up with key phrases that make great titles.

And I'm not telling who the story is about, yet! I have to get approval yet anyway.

So much good news! Congrats on everything! I'm excited for InCreWriJul, it may be just what I need next month :D

Thanks, Isabel :) I'm looking forward to it too.