Hello and Happy Monday! Remember, it's only three days until Friday, and the worst day of the week is already over with (I'm trying to convince myself as much as you, here - edits are kicking my butt).

So today I thought I'd do a little post about books that I absolutely love and adore and which have had a huge influence on me - but which I bet many of you have never heard of before. Some of these books are more famous on one side of the Pacific than the other, some of them don't get the attention they deserve anywhere. Get your pencils ready, boys and girls! You're going to want to write these down. 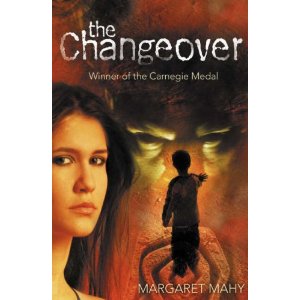 I hope there's at least one or two books here you've not come across before! Order them from your local bookshop, find them in the library, heck, even get them on Amazon - they won't let you down.
Posted by Zoë Marriott at 11:05

By the way, hope to see you on the forum again soon...

Oh, I'll be there - once I've finished these edits on FF and I don't have to fight off the urge to drown myself every fifteen seconds. Argh.

Great post, Zoe! It is so interesting to see which books really hit the bestseller list, and which ones are hardly known at all. I'm always going into fanatics when a new book comes out by an author I adore, and my friends always look at me as if I'm crazy, because none of them have even heard of the author before in their life. Which I don't get; these books deserve just as much credit as, say, the HARRY POTTER series, if not more, and all of them are far better than the TWILIGHT saga. But, what I've found is that, whenever I suggest one of these books to a friend, they love it! The important thing is to spread the word, which I have been doing a lot lately with your books. Another friend has just read DOTF and enjoyed it very much, by the way!

I've read the Curse Of The Chalion series years and years ago, and I agree with you that these books are very good read indeed! What hooked me was Bujold's masterful story telling quality! Absolutely superb!!

Isabel: Thank you! But one man's trash is another man's treasure, so I try not to be bitter about the books that I hate that hit the Bestseller's list. I don't always succeed, but I try!

Cherry: I agree! The way her plots turn into this insane tangle of disparate threads which then somehow transforms into a perfect, harmonious weave by the end just awes me. How does she do it?

I got The Changeling Sea by Patricia McKillip about two years ago when I saw it on your website I loved it =D. I have DWJ Howls moving castle witch I like as well. I think my christmas book list has just gotten longer lol