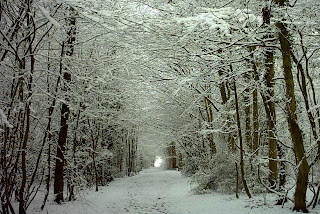 Look at all this snow! And before Christmas too. Is anyone else slightly worried that The Dark Is Rising? Watch out for ravens! (I tell you, I crack myself up - that's the second time I've told that joke today, and it's still just as funny. To me, anyway).

For years and years I have loathed snow. Often, people would wonder why I greeted their cheerful announcements that it was snowing with groans of despair. They assumed I was some kind of Scrooge, wanting to rain on their snow parade.

But the moment the white stuff started falling my head would be filled with memories of slush filling my boots and snow melting through my coat on the way to work, so that I had to spend all day at a chilly, air-conditioned office in damp clothes - and the inevitable sneezing, sore throat and general unwellness that would follow. Of slipping on ice and bashing my knee or elbow as I tried to get on the bus and nearly passing out with the pain. Of buses that never arrived and taxis that were cancelled so that I would be left stranded by the stop for hours, getting colder and colder. Memories of finally managing to make it to the office, only to get sneered at and told off by bosses who, of course, owned nice warm four wheel drives and couldn't understand why a little snow needed to make anyone late.

If anyone had asked me a week ago how I felt about snow, I would have told them flatly and without a thought that I hated it. I now realise that isn't true. It never was. What I hated was having my simple, childlike glee in the beauty of snow, and the way it transforms a familiar landscape into something different and new, stolen from me by my adult responsibilities (and the bunch of complete *******s that I used to work for).

For the next little while I have the enormous privilege of being a full-time writer, and that means apart from taking my dog for a walk three times a day I don't have to go anywhere. Everything I need is right here. I can even, in this day and age, get my shopping online and talk to all the people I like via email (please, God, do not take my broadband from me). I'm able to look at the streets, houses, marshlands and coppices that I see every day with completely new eyes and just enjoy it all. It is, quite frankly, blissful.

But I know that there are soooo many people out there who ARE still suffering, in various ways, through this unexpected cold snap. They have my sympathies, and for their sake I hope the snow goes quickly. I'm just glad to know that, for the moment, I have been freed from hating something that I never wanted to hate in the first place.

Moving on! Over the weekend I made a trip to London (and got trapped in Doncaster for an hour because of the snow, but even that wasn't enough to upset me) in order to take part in an event at my publishers. Some loverly, loverly bloggers came out to hear about Walker Books new Undercover promotion, which includes Shadows on the Moon, and I spoke to them about that for a while, and then about writing, and books, and jewellry and all kinds of other stuff. I had a very nice time indeed. Many thanks to Liz, Sarah, Lauren, Lynsey (did I get the number of y's right?) and Becky!

However, something else very important happened during that visit:

I GOT MY HANDS ON MOAR ARCS OF SHADOWS ON THE MOON!

Which means, instead of the single ARC that I was previously offering, I can now promise *three*. Three! Your chance of winning one just tripled... If, of course, we get 200 followers by Christmas.

Go to work, little grasshoppers!
Posted by Zoë Marriott at 10:10

Email ThisBlogThis!Share to TwitterShare to FacebookShare to Pinterest
Labels: Giveaways, Shadows on the Moon, Trivia

What! In town again and no hello?!

Also, I don't use Google Wotsit, does that mean I can't enter the thingy?

Alas, there was no time for ANYTHING but business. I arrived in London, hopped on the tube and went straight to Walker Books. I did my talk thing. The bloggers left. Twenty minutes later I left. I arrived at the train station with about fifteen minutes to spare, grabbed a sandwich and departed once more. It was definitely under the category of 'flying visit'. By the time I got home I felt like an old grey sock that the dog has chewed up and spat out again (lovely image, eh?).

Hmmm. I'm not really sure how to measure blog readers who don't use the Google whatsit. I mean, I can see the numbers in my stats...maybe...Well, anyway, I'll think about it.

I wish I could go to exclusive and secret blogger parties! I think you met some of the gang who hung out with Maggie, as well (speaking of Maggie, did you see her TEDx NASA video?).

I know how busy you must have been, I was just teasing! Have a kind of retroactive me-waving-at-you-while-you-were-here thing, and plan for a day of leisure in the Summer. Apparently, we're to expect snow tomorrow!

Also, totally know the feeling of dread - I have it for rain, ever since my shoes started taking water (so so miserable). Even though I now have new (watertight!) shoes, rain still seems rather ominous. Winter weather is generally best enjoyed indoors with hot beverages. And chocolate. Lots of chocolate. And maybe a cat.

Maggie, really? Dammit, if I'd realised I would have asked hopeless geeky fangirl questions and...er...yeah, maybe it's better I didn't know. This was my very first secret blogger party too (the bloggers didn't even know they were going to be meeting me, just 'A Walker Author') so I tried to keep my nerd quotient as low as I feasibly could. Which was...not particularly low.

I haven't had time to watch Maggie's vid yet, but I do plan on catching up with it when this blooming book is finished (please, please, let it be finished soooon).

Eeek, leaky shoes. Five minutes of that is enough to make you want to superglue yourself into a comfy armchair.

Congrats, Zoe! 125 followers already! I'm going to get a Google account and then become a follower. Soon....

Maybe next time you can sweet-talk your way into one, and then I can ask *you* geeky fangirly questions (and and I'm massively chuffed that out of zillions of Maggie interviews that exist in the universe, they ('They') linked ours on her website!).

PS - you know your blog is great, right? In case people don't say this to you enough: it's great. I love reading it, it cracks me up, and it forms part of my daily internet diet.

See, people like me and Isabel need some way of being included that doesn't involve us selling our souls to Google. We clearly read you all the time, we have geeky conversations, and we are Deserving of Books.

Aw - thanks, Saya. It's really nice to read that, seriously. There are definitely days when I think 'Oh HECK, another Monday...would anyone notice if I skipped just once?' so knowing that real people are really waiting for their blog-fix is a brilliant movitation.

On Google accounts, I think you're right. You two are both such incredibly faithful commenters anyway, I'll count you as honorary 'followers'. So, if the follower count reaches 198, then we're there. And you both go in the prize draw. Eeeverybody wins.

Haha, exactly, Saya! But I *will* get a Google account, because it's the only way that I can follow and be part of the competition. *Sigh*.

Really?!?!?! Oh, Zoe, you the bestest!!!! Does that mean I don't have to go and get a Google account and then become a follower? Hurrah!!!

Yes, it's only fair. And now, satisfied that I have performed my good deed for the day, I'm off to bed.

Here in Old England, it is late. I need to sleep but I'm working on a blog post because apparently the last one I wrote was nearly a month ago. This is why it's good to blog with other people XD

ZOE! I love you sososososo much!!! I have a Google account, which I never use. I'm going to follow you.

Zoe you are too good to us all.

Hope you had a nice time in London (excluding the delay)

Thank you Meghaz, thank you Bfree. I'm going to revise my competition to be a bit fairer in Wednesday's post, so standby.

*coughs*
It's Wednesday - the day you shall be more fair! I can't wait to see your new post. And I can't wait till you get 200 followers.

I hadn't forgotten! The post just went up, you cheeky flibbertigibbet.

Ooh what a great contest! Hope you get enough followers.

Thanks for the fantastic contest!
I posted about it:
http://kayaloves.blogspot.com/2010/12/giveaway-shadows-on-moon-by-zoe.html

HI Pink, Rebecca and Kulsuma. Thanks for coming to say hello, and special thanks for the blog post Kulsuma.

Hey Zoe, it was lovely to meet you so thank you so much for coming down (especially for braving the weather!) :o) I can't wait to read Shadows on the Moon & I've already ordered Swan Kingdom & Daughter of the Flames (stupid snow has meant they haven't arrived yet but I'm hoping my postie will be back in action again soon!).

Becky, Lynsey & I were all among the super lucky bloggers that got to meet Maggie when she was over here - what an amazing day that was! Next time you're down tell Walker they have to take you to a bar / nightclub / restaraunt called Sketch - it's such a weird & wacky place & I'm sure there must be a story in the egg shaped toilet pods!! (If you want to know more you can read my event write up here http://bookreviewsbysarah.blogspot.com/2010/10/author-signing-maggie-stiefvater-2nd.html)

I've also finally got around to writing up my Walker event report too :o)
http://bookreviewsbysarah.blogspot.com/2010/12/walker-undercover-reads-event-27th.html

Hi Sarah - it was great to meet you too. I actually feel really lucky about the weather. If I'd tried to make the same journey just a few days later I'd probably STILL be stuck somewhere in the countryside. I really, really hope that you enjoy TSK and DotF (when they finally arrive).

I actually read all about Maggie's adventures at Sketch on her blog (yes, do stalk my fellow authors) and I can't imagine Walker Books ever arranging for us to go there. They're way too wholesome! Although I'd love to see the dog sculpture. Thank you for the links, and for saying such lovely things about Shadows (and me!) I'm sure Annalie and everyone at Walker will be really pleased. Phew.