Hello, faithful readers! I'm not quite over my cold yet, but I'm at the stage where I've got my appetite back and I'm yearning for real comfort food. And what could be more comforting than crumble?

I decided to post a step-by-step recipe here because I realised that despite calling myself a Baking Goddess in my biog, I've never really talked about cooking much on this blog. It's a writing blog after all. But since I feel too ill to get any work done at the moment, baking seems like the next best thing. By the way, if my pictures here are a little shaky, please forgive me - I was actually standing on one leg throughout making this crumble (due to the unfortunate accident mentioned in Monday and Friday's posts) and so I was taking pictures with one hand while leaning on the countertop for balance with the other.

One legged baking y'all. That's how I roll.

For those of you who have never really done much baking, let me tell you, it's one of the most soothing occupations in the world. You follow the recipe and food comes out. What could be better? I've even found that if I get a stress headache, whipping up a cake or some brownies will get rid of it and make me feel much happier and more relaxed, even before the tin comes out of the oven. For those of you who are bakers, this recipe will be really simple, but why not give it a go anyway? I promise it's delicious.

Although I was raised, like most people, on apple or rhubarb crumble, once I discovered plum I was an instant convert. Sometimes apple can be a bit sweet and bland, and sometimes rhubarb can be a bit sharp and bitter - but plums have both the sharpness and acidity of rhubarb and the sweetness of apple without any of the downsides. Plus, it's much less hassle to stone and chop a dozen plums than to peel core and slice up apples or deal with fresh rhubarb.

So firstly, you need your ingredients as follows:

Sometimes I also put some ground ginger, cinnamon or nutmeg (just half a teaspoon) into the crumble, but you can leave that out if you don't have it, or don't like it. You'll also want some single cream, custard or icecream to serve with the crumble, since it's incredibly rich and sticky.
First of all, chop up the plums and take out the stones. Be careful not to accidentally put any stones in the crumble - these little babies could do for someone's tooth. The easiest way to do it is to get the plum, slide a sharp knife into it until you feel the stone, and then slide the blade all the way around the stone, cutting the plum in half. One half will come off with the stone in it: then you can easily cut that part in half again and get rid of the stone.
Put all the plums into a baking dish (you can grease it first with butter if you like, but I never bother), then cover them with the caster sugar and a good glug (that's technical speak for about three tablespoons) of lime juice. I use lime because I think it has a less bitter flavour, but you can use lemon if that's what you have. The citrus acid helps the plums break down and go nice and soft when they bake. 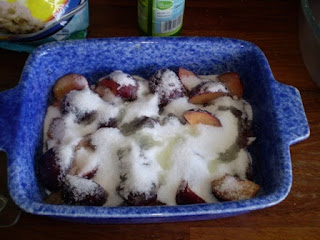 When you've done that, make the crumble topping. Put all the dry ingredients except the oats into a bowl and then rub the flour and sugar into the butter until you have a mixture with the approximate texture of breadcrumbs. But don't be too careful about it. 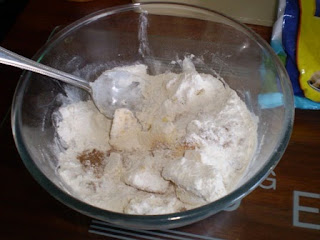 I think the number one reason that some crumbles are a bit dry is that people put a lot of effort into making the crumple topping really fine, almost like sand - but what you really want isn't a fine topping but a nice crunchy one. So leave it a bit lumpy. It'll be better that way. 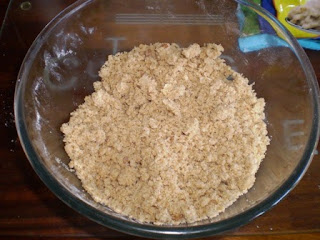 When you've got the crumble right, add the oats and mix them in, then put the topping onto the plums. Depending on how big your dish is, you might have a bit leftover. Resist the urge to just plonk ALL the topping on, if this is the case. Too much topping will make the whole thing soggy. Put any extra crumble in another dish and bake it separately, then you can use later it as a topping for yoghurt, icecream or fruit salad (God, I can't believe what a domestic goddess I am). 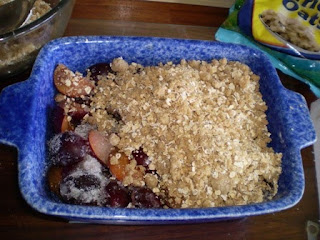 Finally, put the crumple into the oven at about 180C (I've just checked and this would be 360F or Gas 4). If you have a fan oven you won't need to preheat it, but otherwise it's a good idea to put the oven on to warm up about ten minutes before the crumble is ready to go in. Leave it for about forty minutes, or until you can see that the topping has noticeably changed colour and become golden, and that the plum juice (which will be a deep purple colour) has started bubbling up around the edges. 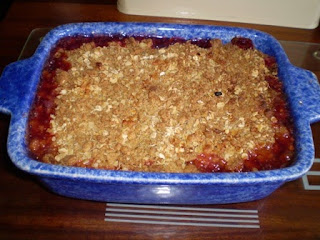 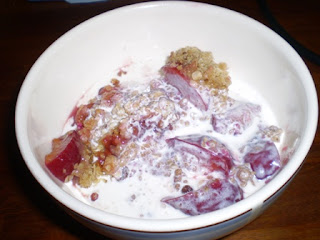 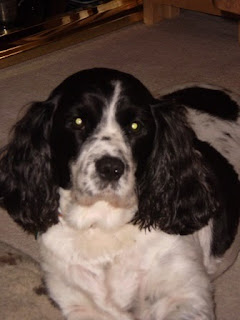 But he can't have any - crumble is bad for dogs. Sorry Pooch!
Posted by Zoë Marriott at 10:20

My favorite dessert with fruit is baked apples. My mom makes bakes apples every September when we go apple picking. She makes REALLY GOOD baked apples! Anyway, my mouth is watering at the sight of all those crumbles. I think I'll show this to my mom; she'll be happy to try out a new recipe.
I'm glad you feel a bit better now. Colds really are so miserable!

Oh, I love baked apples - so long as I can get hold of really good apples. Sometimes the ones that are available from the supermarket aren't that great. Going apple picking sounds like a lot of fun!

Oh, I was just looking at your reviews, and saw that you gave the book THE ETERNAL ONES only two stars. I'm sorry that it didn't live up to your expectations. That must have been disappointing. And you don't seem to have enjoyed NEED too much either. :(. Hopefully the others will be more to your tastes.

This is why I went into such a fit of glee when I read The Demon's Lexicon, and reviewed it on YouTube. Lately I find less and less books that I can really let go and enjoy - I think it's all to do with having to be a hyper-picky author when it comes to my own work. I can't turn that off when I read other people's work.